Wander nowadays down many Shropshire country lanes near small villages like Atcham, Condover, Montford Bridge or Rednal, and you will come across silent, sightless sentinels, looking out across empty fields of corn or cows, derelict control towers watching over long forgotten airfields. High above, only soaring skylarks can be heard, where once aircraft engines filled the heavens with noise, as young men from across the World learned the necessary skills to fight the aerial battles of the Second World War. 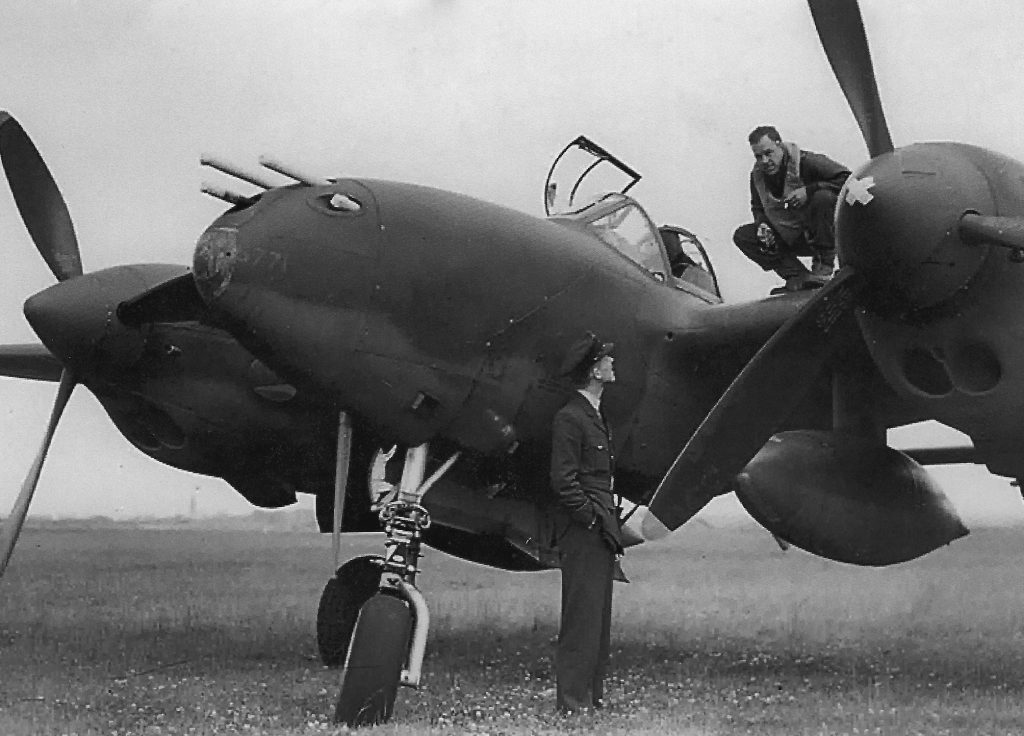 The Spitfires moved south in August and were replaced by the Lockheed Lightnings of the 14th Fighter Group, who flew their aircraft from California. An RAF officer greets one of the pilots. (Shropshire Airfields Through Time, Amberley Publishing)[/caption]

When war clouds loomed in the late Thirties, the adjacent counties of Shropshire and Staffordshire were seen as the ideal place to site the training airfields which would be needed for an expanding air force, thought to be far enough away from Europe to be out of range of the Luftwaffe. Shropshire alone had nearly twenty airfields across its Northern plain, two of them, at Shawbury and Tern Hill, reviving First World War airfields, which had served the same function. Suddenly the skies over Shropshire were filled with aircraft, the circuits at many airfields almost touching.

There was basic training from RAF Tern Hill, advanced training from RAF Shawbury, Bomber Operational Training Units (OTUs) at Tilstock, Sleap and Peplow, a fighter OTU at Rednal and Montford Bridge, the Fleet Air Arm used an airfield at Hinstock which they called HMS Godwit, about as far from the sea as a godwit could fly. Even the Americans came, operating a Combat Crew Replacement Unit at Atcham, and when their P.47 Thunderbolts chanced upon the Spitfires from Rednal, could they resist a mock dogfight?

Other combats were far from mock. Night fighters operated from High Ercall and Tern Hill, stalking the Germans who came to bomb the North-West or the Black Country. Bomber OTUs joined raids on Europe, new crews testing their skills.

Even in training accidents were many, young men let loose on powerful machines, always a recipe for disaster, and especially with the Shropshire and Welsh hills close at hand. The Americans at Atcham had a favourite sport, chock to chock races in their powerful Thunderbolts, all around the Wrekin, which loomed large just to the south. Such was its peril that they placed a warning beacon on the top, with the on/off switch in Atcham control tower, turning it off when Germans were about. After the War, when Atcham closed, the switch was moved to High Ercall, and now resides in the tower at RAF Shawbury. 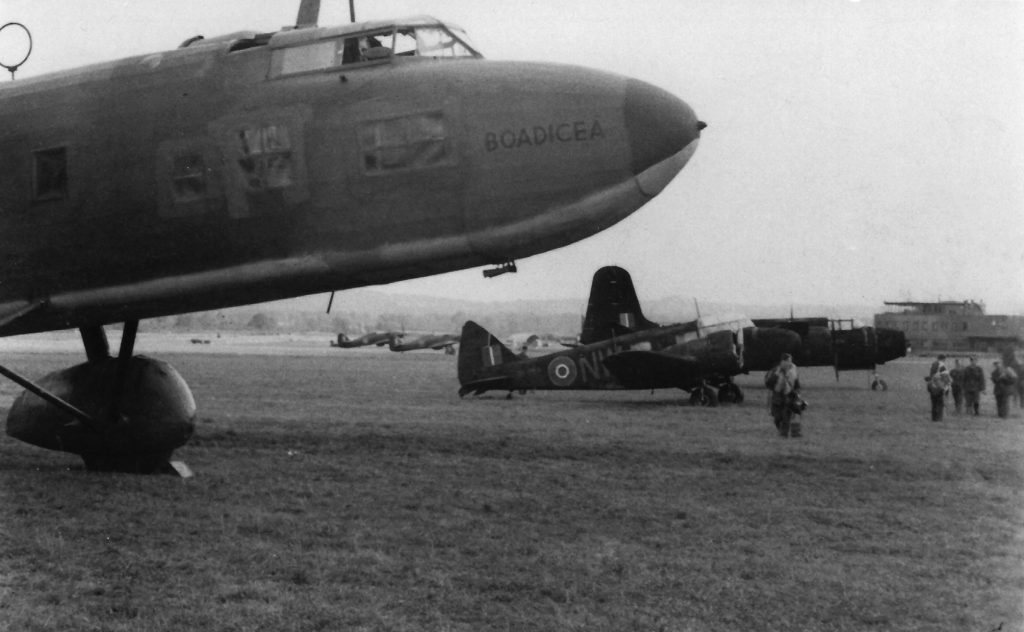 This photograph has always been attributed to Tern Hill, but shows 1456 Flight Turbinlite aircraft. In the foreground is a Handley Page Harrow transport ‘Boadicea’, sometimes called a ‘Sparrow’ without the front turret. Behind is an Airspeed Oxford of No. 286 Army Co-operation Squadron, a Havoc and two black Hurricanes of 1456 Flight. The Pontoon and Dock Company, currently make Marina equipment in this Type K hangar on No. 2 Sub Site. High Ercall has a total of three Type K hangars. (Shropshire Airfields Through Time, Amberley Publishing)[/caption]

When the invasion of Europe loomed, assault gliders were assembled at RAF Cosford, and glider pilots trained at Tilstock, Peplow and Sleap, and then they went away to carry the fight to Normandy fields.

At the end of the War the cut back was swift, airfields soon closed, those at High Ercall and Tern Hill lasting longer than most. RAF Shawbury remains today training the helicopter pilots for all three services, including, in its time, two young princes. Its runway remains a safe haven for aircraft in difficulty, in an area of the country where few remain. RAF Cosford remains the sole training base for ground based trades, and the home of the RAF’s only surviving annual Air Show. Tern Hill was turned over to the Army but the helicopters from Shawbury visit often. Sleap became Shropshire’s main general aviation airfield, and up on the Long Mynd, the one airfield closed during the War, has thrived since, as the home of the Midland Gliding Club. One other airfield is a surprising survivor, little RAF Chetwynd, a neat grass field lost down the lanes north of Newport, continues to serve as an extra landing field as it has for over 75 years, currently for the helicopters from Shawbury.

Hopefully my book makes sense of what once was there, and what little still remains, those silent sentinels, the old control towers, those small industrial estates in surprisingly rural places, built on the old technical sites like Condover, Hinstock, Atcham or Rednal, those derelict Romney or Maycrete huts in farmyards or woods. Unsung memorials to a generation of young men now disappearing as they are reclaimed by Nature and the march of time. 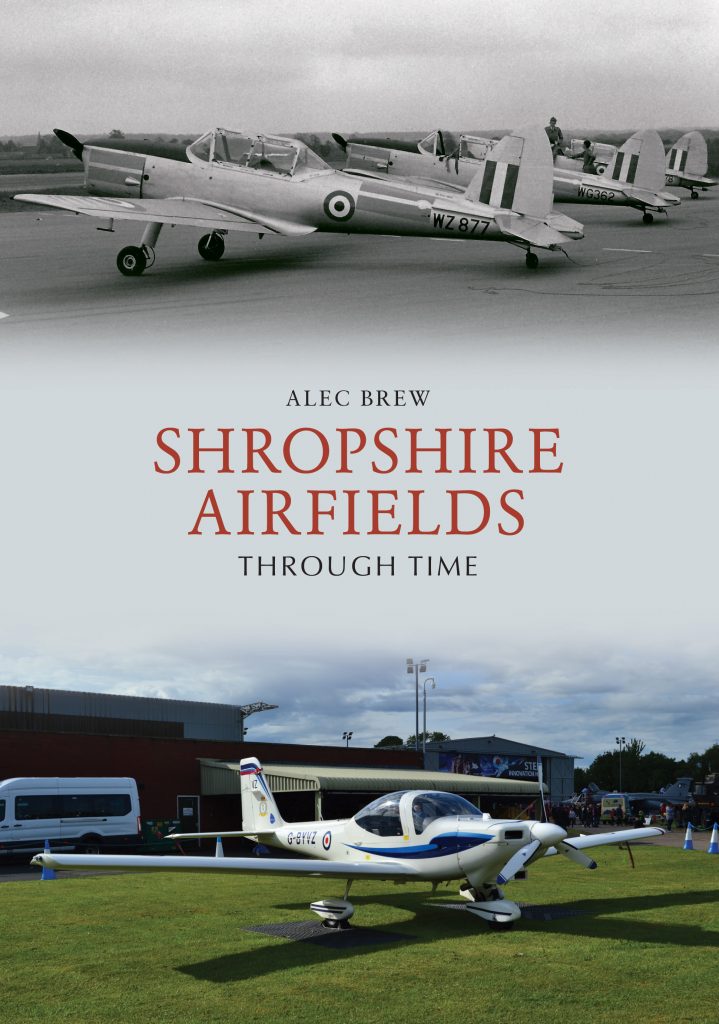