50 Gems of the Lothians by Jack Gillon

The Lothians consist of West Lothian (Linlithgowshire), East Lothian (Haddingtonshire) and Midlothian and Edinburgh (Edinburghshire), which nestle along the south side of the broad estuary of the Forth.

The strategic location and political and economic importance of the Lothians, with Edinburgh at its centre, have made the region witness to some of the most significant events in Scottish history. This is reflected in the remarkable wealth of architectural heritage spanning thousands of years. The Lothians have been settled since prehistoric times, as reflected in two of the gems in this book – the fortified settlement of Traprain in East Lothian and the sacred site at Cairnpapple Hill in West Lothian. Castles, royal palaces, churches and industrial buildings of national importance abound in the Lothians. 50 Gems of The Lothians explores the places that make the Lothians special and tells the fascinating story of their rich and varied past.

With this wealth of heritage, the task of selecting fifty places to represent Lothian’s rich architectural legacy has been immensely difficult and not everyone will agree with the selection. However, hopefully it will be of interest, even if your particular favourite has been omitted or you think a particular example is less than worthy of inclusion.

50 Gems of the Lothians explores the places that make the Lothians special and tell the fascinating story of their rich and varied past. It takes the reader from Edinburgh, with its castle, the Scottish Parliament and the Palace of Holyrood House, to the East Lothian village of Athelstaneford, the birthplace of the Saltire, Traprain Law and the historic Hailes Castle.

Among the gems of Midlothian are the glorious Rosslyn Chapel, which was the setting for the finale of The Da Vinci Code and described by its author, Dan Brown, as ‘the most mysterious and magical chapel on earth’. This book also explores the highlights of West Lothian including the Bo’ness &Kinneil Railway, Linlithgow Palace (birthplace of Mary, Queen of Scots) and the impressive Hopetoun House, near Queensferry.

Here are just  a few of those gems: 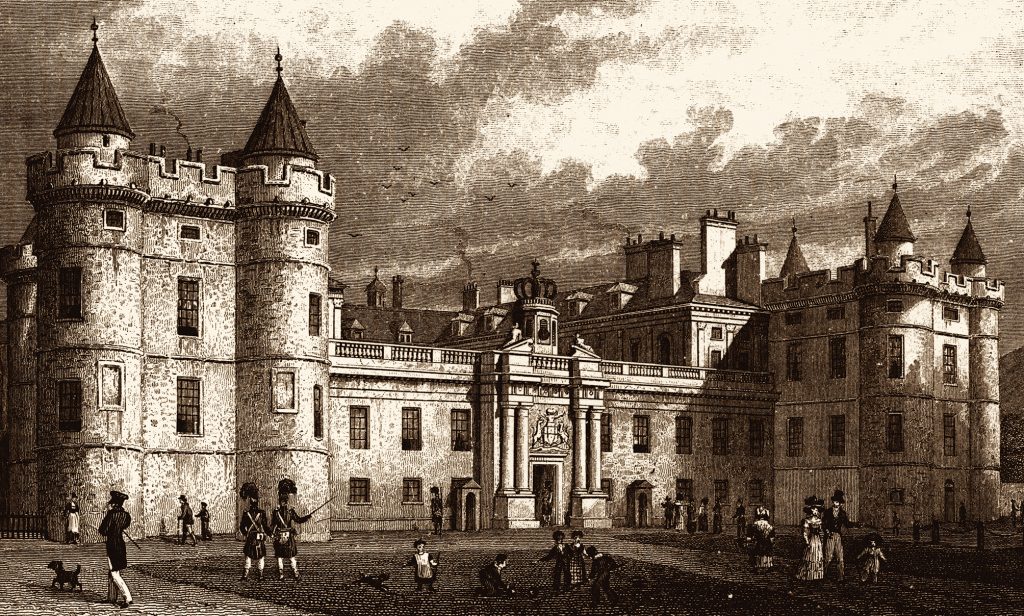 The Palace of Holyroodhouse. (50 Gems of the Lothians, Amberley Publishing)[/caption]

The Palace of Holyrood house and Holyrood Abbey

The abbey was founded in 1128 and was the base of Augustinian monks who were granted the right by a charter of David I to form a new burgh between the abbey and the Netherbow – the Canongate. The Scottish kings made the abbey their main residence when they were visiting the area until James IV started to build a palace.

Between 1195 and 1230, the original abbey was rebuilt as a substantial building of great importance and splendour, consisting of a choir, transept and an aisled nave. It has been witness to some of the most dramatic moments in Scottish history.

It was repeatedly burned by English armies and suffered further damage in 1559, during the Reformation. After the Reformation, the nave was used as a parish church. However, in 1570, the choir and transept were in such poor condition that they were demolished. 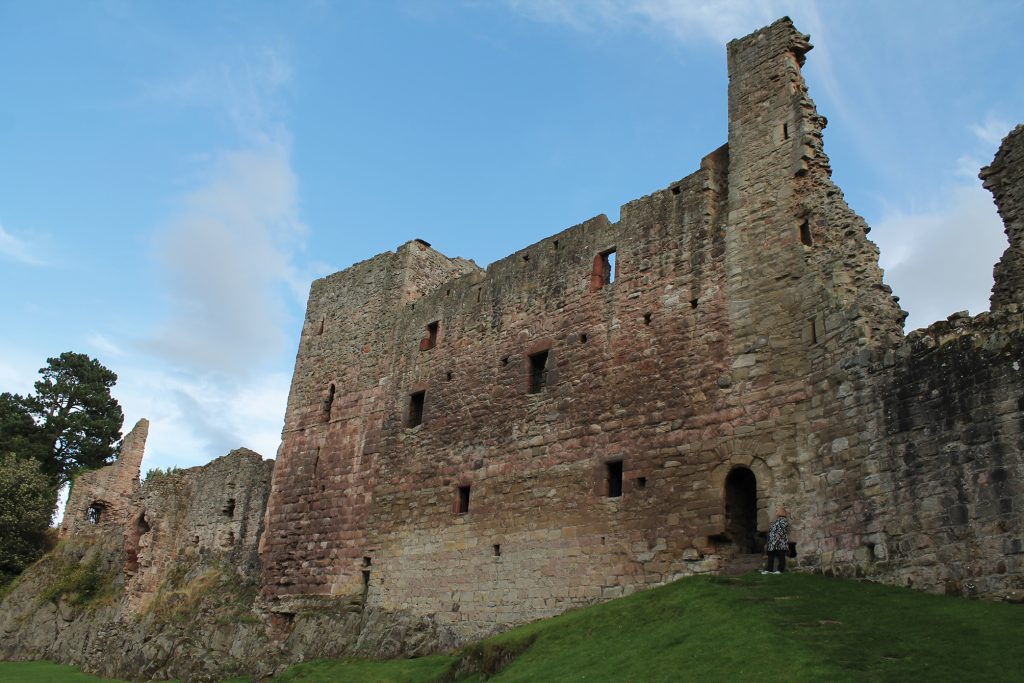 The substantial ruins of Hailes Castle are located around 4 miles east of Haddington along a single-track road and hidden away in a peaceful riverside setting on a bend of the River Tyne. The castle has its origins in the early thirteenth century as a fortified tower house for the Earls of Dunbar and is one of Scotland’s oldest castles. It was later held by the Hepburn family and Mary, Queen of Scots was entertained by her third husband James Hepburn, 4th Earl of Bothwell, at Hailes. There are two vaulted pit-prisons and a dovecote in the original tower. 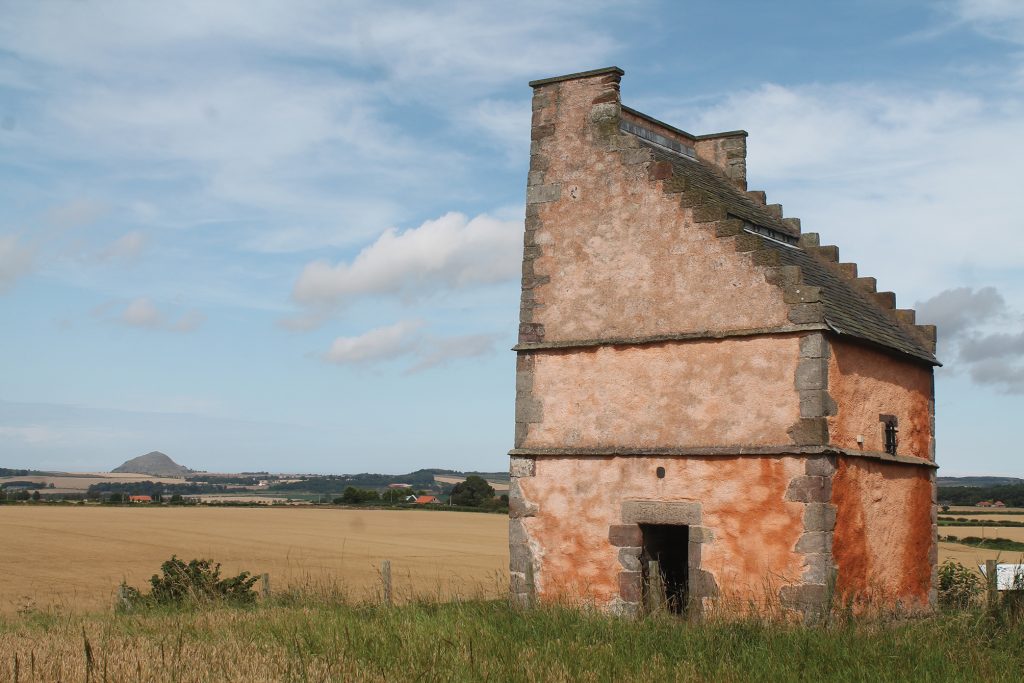 Athelstaneford, pronounced locally as ‘Elshinthurd’, lies some 3 miles north east of Haddington. It was established by a local landowner as a planned village in the mid-eighteenth century. Low, whitewashed and red-pantiled single-storey cottages stretch along both sides of the wide road. The village is the legendary home of the Scottish Saltire. The story has it that in AD 832 a Pictish army was mustered in the area for a battle with the invading Angles. Before the battle St Andrew appeared in a vision to Óengus II, the leader of the Picts, and predicted their victory. The following day a white cross formed by clouds appeared in a blue sky and the Picts went on to win the battle. The village is also said to take its name from Athelstane, the leader of the Angles, who was killed at a local river crossing by Angus McFergus, the Pict.

The legend has made Athelstaneford an important site on the Saltire Trail with the National Flag Heritage Centre based in a lectern doocot, which dates from 1583, in the village.

Doocots (dovecotes) are prominent features in the rural landscape of many parts of Lothian, as estates were relatively small and consisted of rich arable land producing fine agricultural crops, which provided an excellent source of food for the pigeons. 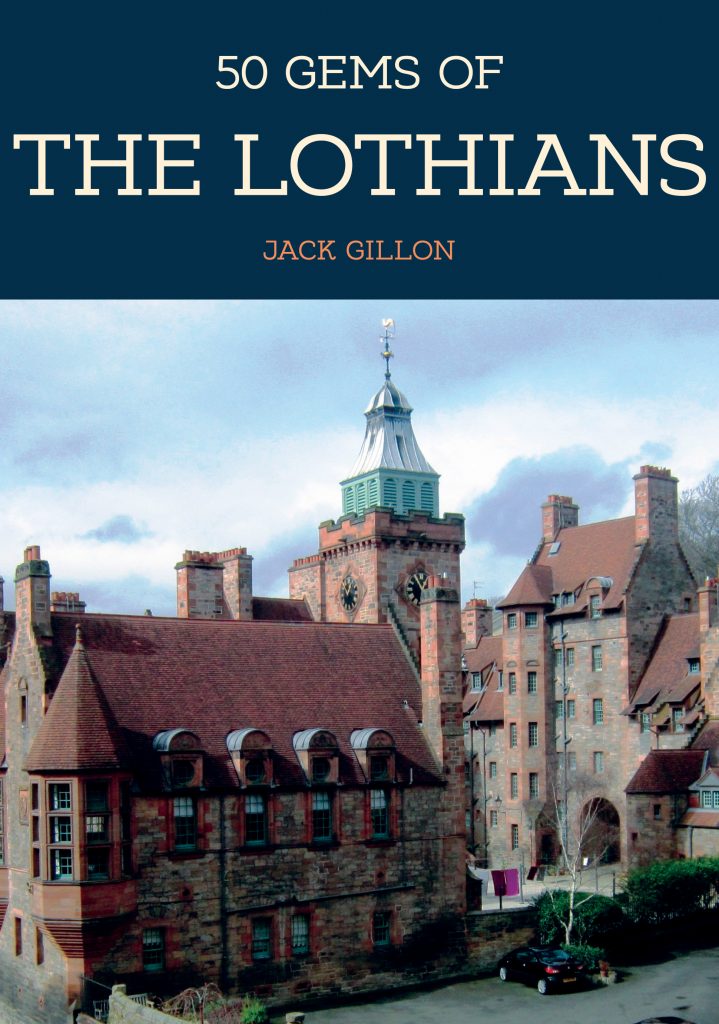 Jack Gillon's book 50 Gems of the Lothians is available for purchase now.