Grub Street: The Origins of the British Press by Ruth Herman

Why write about old news? Grub Street and the Origins of the British Press

I’ve always been interested in the news. From my first days in Public Relations to freelancing for the drinks trade press the ways in which events are reported have fascinated me. Later on when I embarked upon an academic career I found myself researching the arcane world of the early newspapers. I found it fascinating and much more serious. Punishment for the wrong copy didn’t simply mean getting your work spiked. It was more likely to be your ear or your cheek that bore the permanent marks of your transgression. 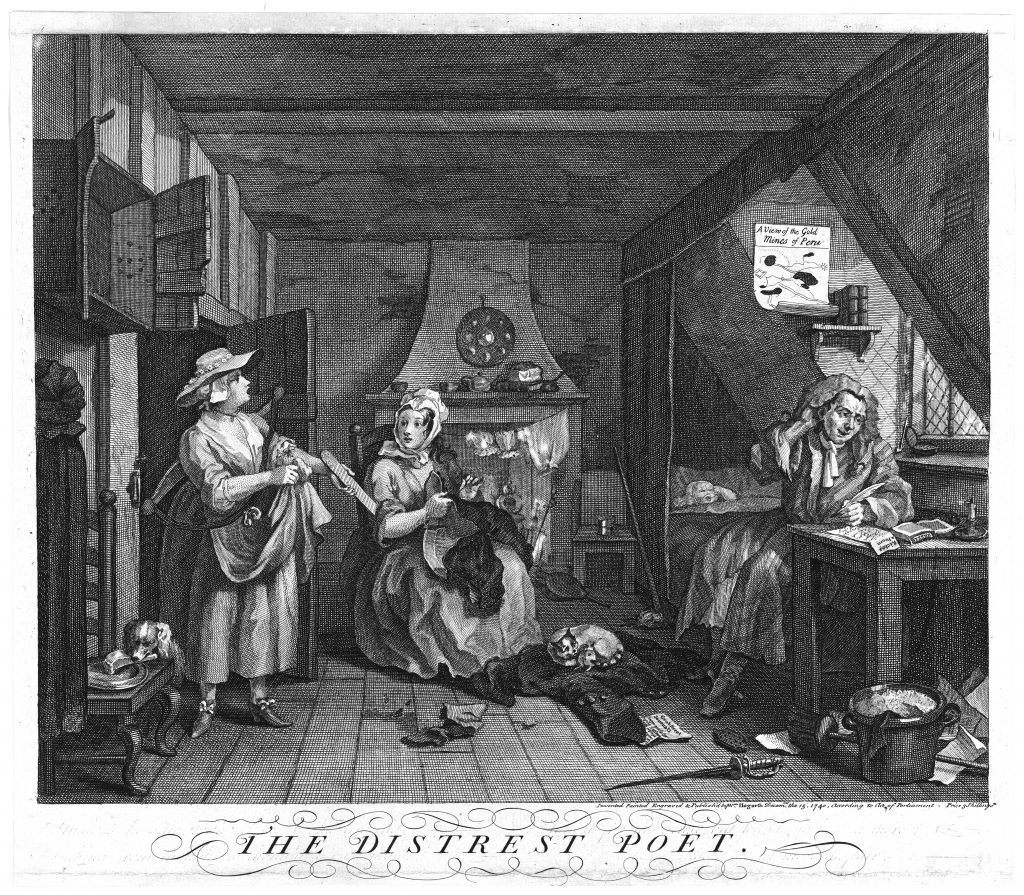 Hogarth’s Distrest Poet is a depiction of a Grub Street hack’s poverty-stricken living conditions while writing anything that will earn him some money. (Courtesy of the Metropolitan Museum of Art, Grub Street: The Origins of the British Press, Amberley Publishing)[/caption]

So I’ve just written a book which sets out to give an introduction to the wild, bizarre and dangerous world of early newspapers and other ephemera in Britain. The days are long gone when the print was laboriously set by some apprentice. Speed of publication was measured in days rather than seconds and tweeting was something that only birds did. So you may be wondering why anyone would  study a sheet of newsprint which was destined at best to be tomorrow’s pie-wrapping? Does anybody care that 300 years ago owners lost their dogs and their wives and they put a poultice made from pigeon faeces on their thinning hair. (Yes they did – it’s in the book).

From what I have just written you can see that, apart from the bird poo, people all those years ago were occupied with many of the same issues. Although printing technology was in its infancy the similarities between yesterday’s Grub Street hack and today’s journalist are clear. Online or in the stocks there is a continuum of news which applies when one set of people reports on what another set of people are doing. Journalists can go from providing readers with the most damaging and salacious stories to pursuing those who are harmful to the public. Celebrity love lives or fraudulent tycoons will excite readers and often it seems that the reporters make no distinction. Because reporting on either could risk prosecution and worse I started to think about the brave souls who set themselves the task of telling the “truth” about the hierarchy. I became fascinated by the way that 21st century reporters will pursue a president in much the same way as their 17th century counterparts attacked a king. 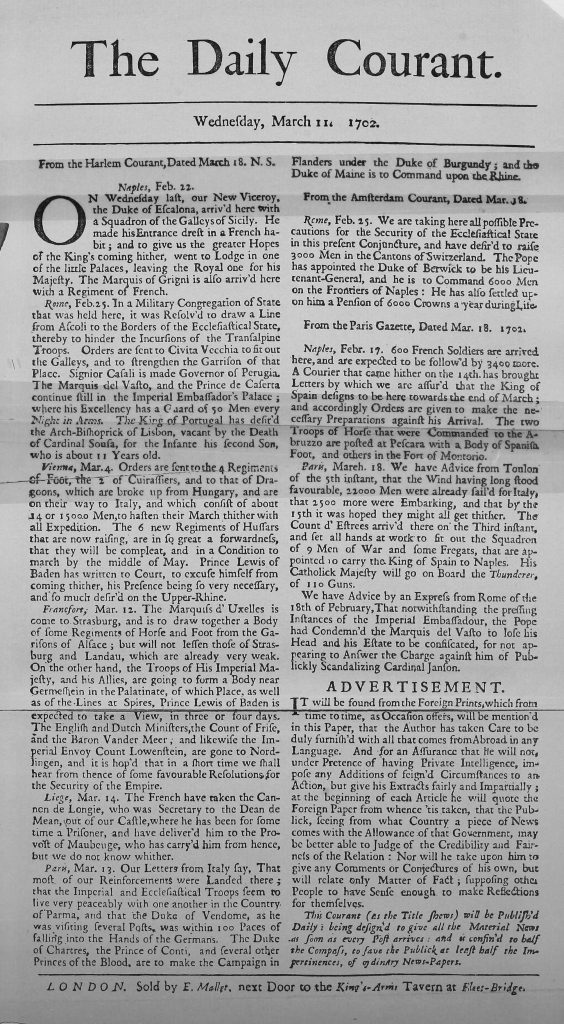 The Daily Courant. This publication paved the way in the newspaper industry.(Grub Street: The Origins of the British Press, Amberley Publishing)[/caption]

This last thought brings up a word which has so much weight in both today’s reporting and the writings of every age that it almost blows a hole in the page. It’s the little but oh so powerful word “Truth”. Truth is such a slippery idea and as everyone knows it is sometimes difficult to pin it down. It is particularly tricky to tie in with its stable mate, fact, a concept which is also notoriously fluid and disturbingly often has little to do with “truth”. We are all aware that the powerful often lie or at least suppress the “Truth” because they can. Who is going to challenge them? This is where the very brave writers and journalists literally risk life and limb to hunt down the falsifiers and the producers of that very old concept “fake news”.

The purpose of the book was not necessarily to illustrate the negative and dark side of the ephemeral world of the newspaper. I also wanted to show how these fascinating collections of words illustrate how people lived and thought. Would you now believe that a cow could escape from London’s Lincoln Inn Fields to run amok in High Holborn and end up falling off the top floor of an inn? It happened. Or that people thought that a string of metal beads could cure toothache? They did. The pages of these eclectic early news-sheets are a window on sophisticated, witty, clever folk whose knowledge of the world may have been more limited than ours but their zest for life was just as great. They also wanted to know what the Queen was wearing and how our soldiers were doing overseas. They went to the theatre and they went shopping for clothes. Women ran away from their husbands and others had babies. They lost dogs and pet birds. They bought houses and sold all sorts of goods. They even gambled on lotteries and lost money on the new stock market. So they weren’t so different to us. It is by reading these newspapers that you can see that despite not having Facebook or any other social media life carried on. So the book is full of stories and anecdotes which may amuse, delight or puzzle the reader. While I was reading these old new-sheets I certainly felt quite at home with the writers, although they were often guilty of using ten words where five would have done.

To finish this blog I would like to share with you that it was a treat to research the book and I hope that you enjoy it as much I enjoyed writing it. 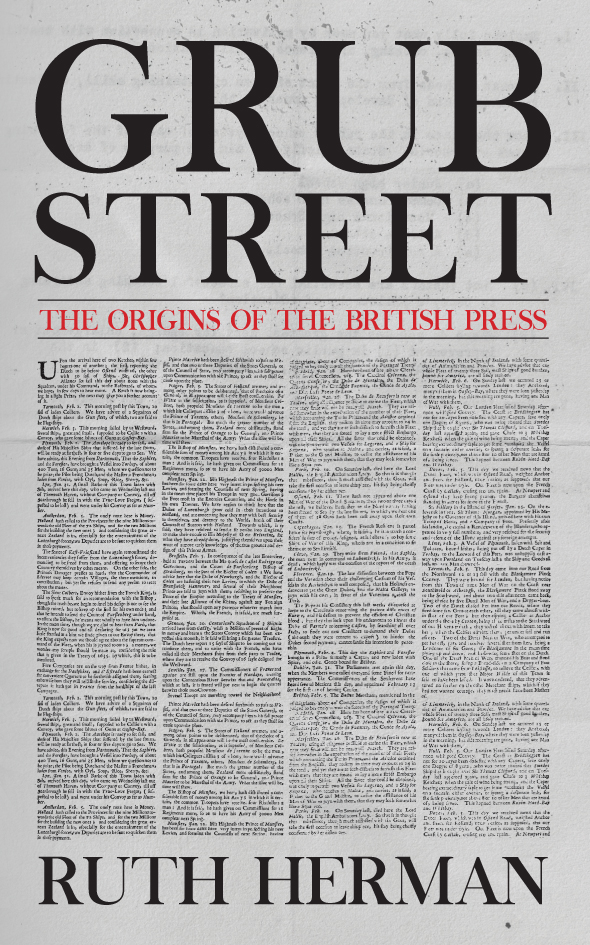 Ruth Herman's book Grub Street: The Origins of the British Press is available for purchase now.