A-Z of Stamford by Christopher Davies

When asked to write an A-Z of Stamford, the task seemed restively simple. However, once I gave it some thought, I realised that there were two questions that needed to be addressed before I could start putting pen to paper. The first of these was ‘who am I writing this for’ and, secondly, can I find sufficient material to cover every letter of the alphabet.

The first question is possibly the most problematic. Serious historians of Stamford (of which there are many) will already be well acquainted with most aspects of its history. So, after much thought, I decided to aim this book at the newcomer to the town and those with a passing interest in local history. 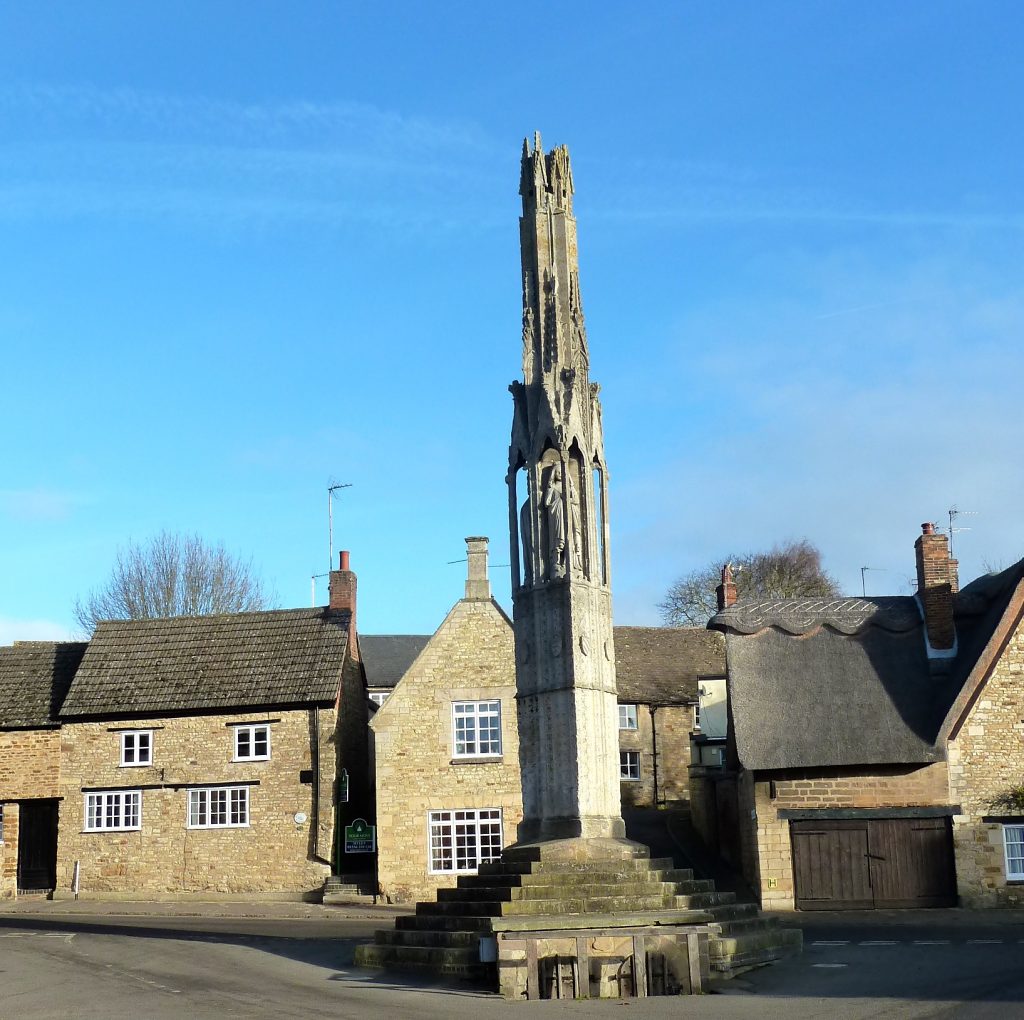 The Eleanor Cross at Geddington. (A-Z of Stamford, Amberley Publishing)[/caption]

The question of what to include in an A-Z was much more taxing. What I wanted to do was to give an overview of the town’s development within the constraints of the brief from Amberley. Generally speaking, the first half of the alphabet does not tend to cause huge problems. In fact, it would probably be quite easy to fill a book just using the first half of the alphabet. It does mean however, that it is necessary to carefully select those aspects of the town’s history which will be of interest to the casual reader, and present an overview of the town’s history.

From O onwards however, is a different matter, particularly X, Y and Z. In writing the A-Z of Stamford I was fairly certain of being able to cover most letters of the alphabet. The letter K caused a problem however, and I had to fall back on Klips Hill, which was the earlier name for Barn Hill. The letter X was always going to be a problem, as X does not figure at all in local personal names or place names. However, a flash of inspiration reminded me about the incised X on certain buildings to denote parish boundaries. The six parishes of Stamford were irregular in shape. Reference to Knipe’s map of 1833, for example, shows that St John’s parish was in two parts, separated by All Saints parish; St Michael’s parish was separated by part of St George’s parish. However, for a number of reasons, it was important for people to know in which parish they lived. The answer to this was to place an incised cross on to buildings where two parish boundaries met. Over the years, some 29 such marks have been located in the town, although they are ever in danger from re-building and alterations to buildings. Some years ago, the Lord Burghley public house was completely rebuilt, and it was only intervention from the writer of this blog that ensured that the parish boundary mark on the front of the building was preserved. 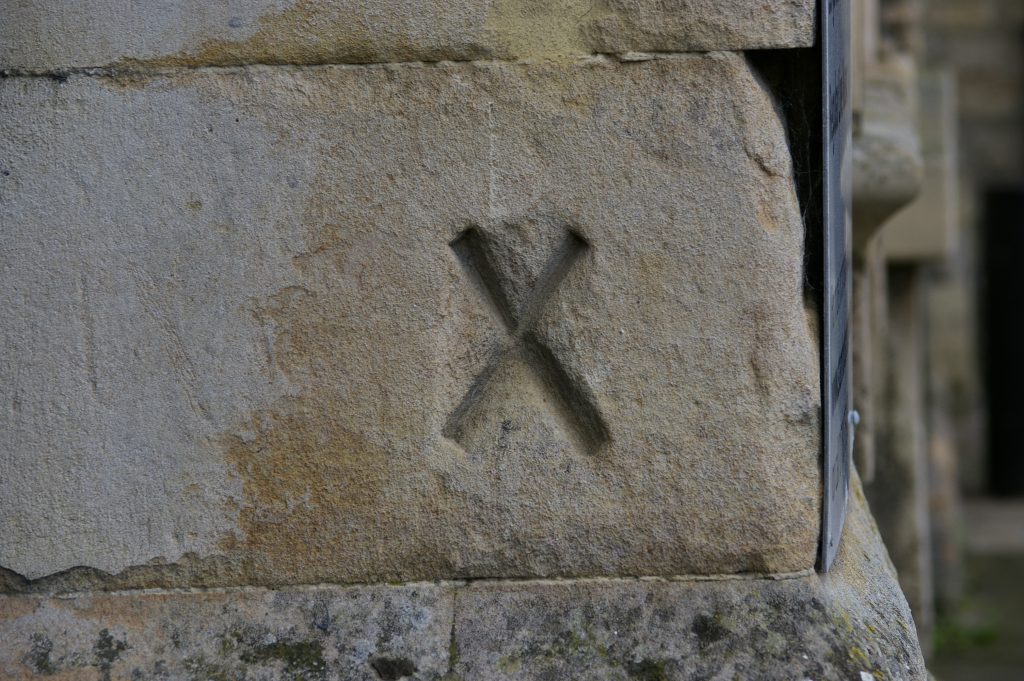 Parish boundary mark. This particular mark is to be found at the entrance to the Theatre Cellar Bar in St George's Square. (A-Z of Stamford, Amberley Publishing)[/caption]

For the letter Q I decided to use the Queen Eleanor’s cross that once stood on Casterton Road. The main reason for this was that it presented the opportunity to re-examine the evidence for where it actually stood.  The 17th century Town Clerk and historian Richard Butcher, seems to have it firmly placed in the area of Clock House on Casterton Road. Later evidence very clearly has it in the area of Foxdales. In 1745, William Stukeley reported that the base of the cross had been discovered half a mile north of Stamford. In 1993, a fragment of Purbeck marble was found in the garden of Stukeley House in Barn Hill (William Stukeley’s home in the 1740s). The appearance of this fragment accorded with the description of the upper shaft of the Stamford Eleanor Cross which Stukeley claimed to have found in 1745 on Anemone Hill, which is the upper part of Casterton Road. It looks therefore as if Butcher was wrong in where he placed the cross in the 17th century. This however leads to an interesting question. Butcher was reporting what he could see; so if what he could see was not the Eleanor Cross, what was it? For illustrative purposes, I had to use the Eleanor Cross at Geddington as my example. Fortunately, it is said to be stylistically for similar to the one that once stood in Stamford.

I have to confess that Z was something of a cop-out. Search as I might, I could not find anything significant in the town’s history that I could use. However, searching through my stock of newspaper cuttings, I came across a report of Zeppelins circling the town in 1916 and 1917. Not unusual I suspect given the proximity of a Royal Flying Corps base just a mile to the south of the town.

Writing the book has been an interesting exercise, even for someone who has been involved in Stamford’s local history for over forty years. It has certainly forced me to re-think a number of aspects of the town’s history, and to put myself in the place of someone new to the town or just visiting who wants to know a little about Stamford’s history. 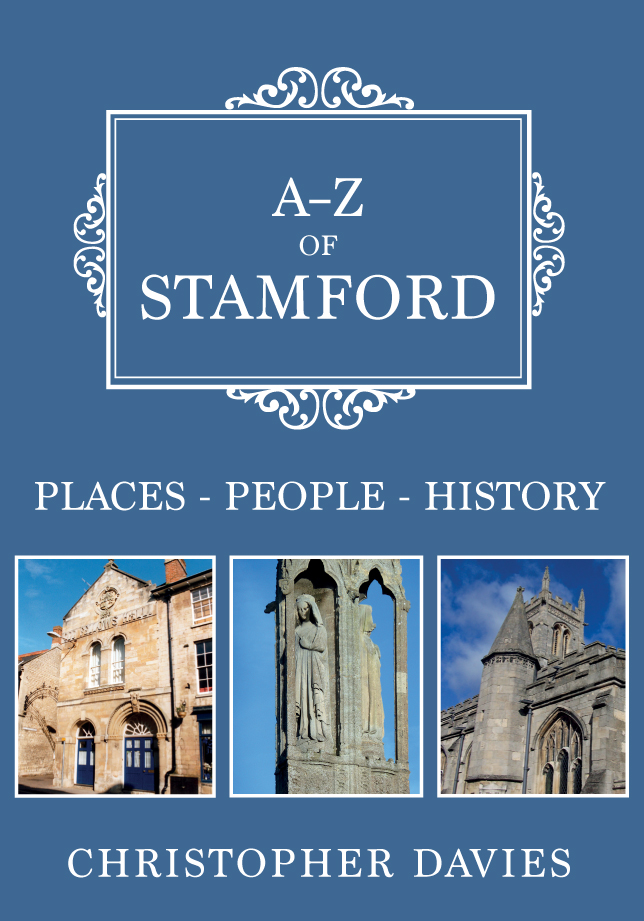