It was a great honour to be asked by Amberley and Historic England to write the latest book in this series, and the second of three (so far) on Sussex. There are many different ways that writers can approach writing about the history and heritage of Sussex, and I think I’ve tackled most of them. The chronological route is logical and aids understanding of each era but provides problems with themes such as industry or literature which traverse different eras. It also questions as to how and when you divide up the past. Taking a random approach, as previous Argus Editor Mike Gilson urged me to embrace for the Super Sussex newspaper supplements I wrote for them, was scary at first but then liberating. Then there is the approach my history organisation, All-Inclusive History uses for writing and workshops, which I’ve christened ‘twistory’. This is where one aspect of a historic event is the connecting link to another, so you are taken on a ‘related ride’ rather like the Great Glass Elevator in Willy Wonka’s chocolate factory, rather than the monorail approach chronological progression presents. Ricocheting across themes and time throws up logical patterns and questions we don’t always think of when approaching the past in a more traditional and (some would say) sensible fashion.

Then we have the route we take in putting together Historic England: Sussex. This method - approaching the past through its images and observing themes through categorization also is a valid and interesting approach. Thanks to the Historic England and Britain From Above image databases in partnership with us for Amberley Publishing, we here are offered a new perspective on our county. The databases in tandem allows us to explore Sussex anew through the combination of different themes. We get to compare and contrast, challenge and query, and it is my privilege and honour as a Sussex author and tour guide to take readers in this book on a visual tour through the images of this wonderful part of Historic England. It was interesting that the images that were provided for the book’s sequel, Historic England: Brighton and Hove, provoked an almost totally different approach and thus set of chapter headings.

Apart from Chapter 1, ‘Landmarks and Scenery’, each chapter of Historic England: Sussex takes you on a journey of sites on that theme from the west to the east of the county, rather than in chronological order. The idea is that readers can use the book to hopefully plan trips out.  As Sussex was the Kingdom of the South Saxons, there is no better route to travel than that taken by our premier Saxons Aelle, Cissa, Wlencing and Cymen – westwards. If you should try to recreate this, please try to avoid the mass killings and especially the large-scale slaughter at Pevensey. But do tell me if you find where the lost Saxon battle of Mercredesburn was.

What types of images are in the book? You will find photos, sketches, plans, diagrams and pictures. Not all of these make interesting analysis and reading, so the challenge was to select images that made a coherent chapter each time on a theme and provoked the reader to want to explore the Historic England archives further. This was no problem with images such as diagrams recreating monks at work in Battle Abbey, intriguing images such as Morris Dancers mid-air in Chichester (my favourite), or the most mysterious – Victorians at Pevensey Castle ‘In search of the monument of Adrian G (undiscovered).’ No amount of (metaphorical) digging could help me find out who Adrian G was, what or where his monument was, and if it was ever found.  If you know the answers, please enlighten me! I also got to mention my favourite place in the world, Chichester Harbour, of which Bosham and Chidham are the places I am at my happiest. What more can an author ask for?

The book also makes you realise how many fantastic Sussex buildings are much missed, whether Worthing’s 1830s Town Hall, Ardenrun Place, Eridge Castle, Roberts Marine Mansions in Bexhill or the lofty Leyswood. The site of the school where the unruly Suffragette Emily Wilding Davison once taught on Worthing Seafront has since been demolished not once but twice. It also highlights thankfully the amazing job of organisations such as Historic England today, without whom we wouldn’t have the Clergy House, Alfriston (the National Trust’s first ever building purchased in 1897), Hurstmonceux and Bodiam Castles.

Writing it was not without its challenges, however. Not only did Adrian G’s monument remain undiscovered by me also but road name changes meant that tracking down what had happened to Devonshire Terrace involved engaging my erstwhile Hastings researcher, the Penfold to my Dangermouse, the Rowley to my Greg Heffley, Terry Loftus – so thanks, Tegs!  The cricket ground there is now the Priory Meadow shopping centre. An image listed as ‘Rye’ had me panicking when I corrected it to Church Street, Steyning but then discovered that the Brotherhood Hall in the photo I believed it to be was two floors taller in other later pictures (Steyning Grammar School who owned it enlarged it thankfully a few years later, so I was right!). Overall, I’m proud of this first of my two books in this series and especially that a chapter in the book on education has a first attempt at a much-needed book on some of Sussex’s amazing schools over the centuries. Some of the images in it are incredible too, especially of the staff of North End Road School, East Grinstead, who seem a formidable family.

As somewhere that has been a kingdom in its own right, a gateway to England, battlefield, agricultural breadbasket and livestock larder, it is no surprise that Sussex has a large archive of historical documents, diagrams and pictures we can explore here. In more recent centuries it has been escape route on the way to exile for Charles II, aristocratic adventure ground, playboy’s playground and real estate for royalty. It offered havens to heathseekers, a stomping ground for smugglers, and a destination for daytrippers. Today it provides a paradise for painters and photographers, rural retreats, spiritual refreshment for ramblers, and still even seclusion by the seaside. I was delighted to be asked to select images to highlight all of this as my parents always encouraged me to get out on my bike discovering my (then) hometown of Brighton, and then always took us out and about in the car exploring every backstreet and village lane we could. This means that I hope the book encourages existing residents and visitors alike to explore and escape the traditional tourist hotspots.

From Charles II’s escape through Sussex we have the George and Dragon pub in Houghton, and I particularly loved the images of our now lost St Leonards pier, which graces our front cover of the book. Being Sussex it was essential to capture not only the beauty of the coastline but also its harbours and those who work in them. This is where our ‘Work and Industry’ chapter came into its own, showing fisherfolk, boatbuilders, locomotive works, labourers and even medics in the Great War at Great Dixter. Thanks to Nathaniel Lloyd, the prolific Edwardian photographer and owner of Great Dixter, a large chunk of the Sussex images in the archive are of the era just before the First World War and of the terrible years of 1914-18, when the impact of that horrendous conflict impacted on the deepest of Sussex’s villages. Even Great Dixter became a hospital for the wounded who faced shelling, flame throwers, gas and bayonetting.

Today Sussex is peaceful and still largely rural, although its urbanisation still is a work in progress as green fields turn concrete grey and bleak with business parks. Thankfully the still-recent creation of the South Downs National Park has guaranteed a green spine throughout the county, protecting Kipling’s ‘blunt, bow-headed, whale-backed Downs’ equally beloved by him and our other great Sussex patriot, our adopted Belloc. Being blessed with the nation’s 13th National Park means Sussex must always look backwards as it moves forwards, but then, that is what Sussex has always done best. It is what we do in the book too, which I hope you enjoy and if you would like an illustrated talk on the book, or a motorised tour of a selection of its locations, please email info@allinclusivehistory.org or call 07504 863867.  As after all, as Flora Poste says in Cold Comfort Farm by Stella Gibbons “Sussex, when all was said and done, was not like other counties.”  That is true of the Sussex represented by the earliest images in our archive, and is still true today. 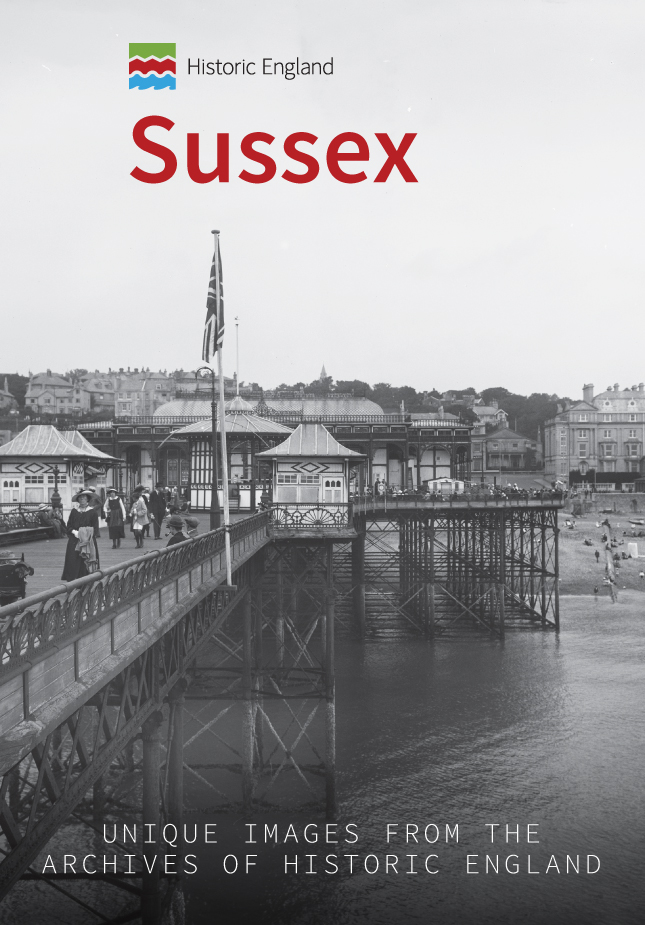