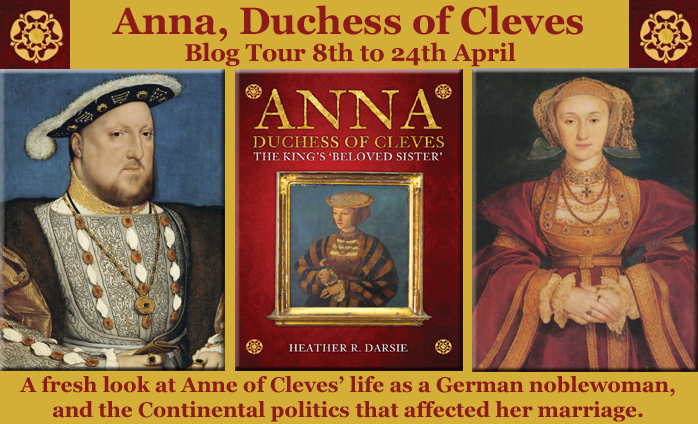 The final stop on the 'Anna, Duchess of Cleves' Blog Tour

Back in 2012, my interest in Henry VIII and his six wives was awakened, so I began reading any book I could get my hands on about these women. Whenever I read anything about Anna of Cleves, I always felt that her story was somehow incomplete. In summer 2015, I decided to start researching her life and thought I should write a biography about her if I found anything interesting. Needless to say, I think I did.

While completing my BA in German Languages and Literature, I took several courses on German history. These courses familiarised me with the Holy Roman Empire during the reign of Charles V, when Anna was alive. I thought more about how in every English language book, she was called ‘Anne of Cleves’. I suspected her given name was Anna, and began plotting the course which my research would take into German sources.

Having developed research skills while pursuing my Juris Doctorate, I knew I had to go straight to the original sources. I wrote a letter to the Mayor of Cleves in August 2015. He very kindly forwarded my letter to the Swan Castle in Cleves, who sent me a great deal of information and referred me to the proper archives. By Jove, this woman was indeed named Anna, and there was a lot more to her life than what has been believed for hundreds of years.

Anna’s life and experiences from the German perspective are very different in some ways than what has been described in English-language books. That is not to say that any English biographies about Anna are wrong, but rather that looking at the German sources helps to make more sense of Anna’s life and short marriage. The German sources show what a valuable bride Anna was to any suitor, and why she stayed on in England after moving there in December 1539.

It is my sincere hope that this biography augments the generally accepted view of Anna, her family, and the political entanglements in which she was enmeshed. I also hope it brings more knowledge about German history to English speakers.

Throughout, I refer to Germany, Germans, and the German language. My use of ‘Germany’ refers to German-speaking Central Europe under the Holy Roman Empire. By ‘Germans’, I mean those living in the area that constitutes present-day Germany. I use the term ‘German language’ to describe the various Germanic dialects that were spoken in that area.

To frame Anna’s life as a German woman, I chose to use the German, non-Anglicised, non-Gallicised names for Anna and her immediate family. I have used the umlaut in German place names as a gentle reminder of the Germanic perspective of the book.