The British Seaside by Stuart Hylton

I didn’t always like to be beside the seaside 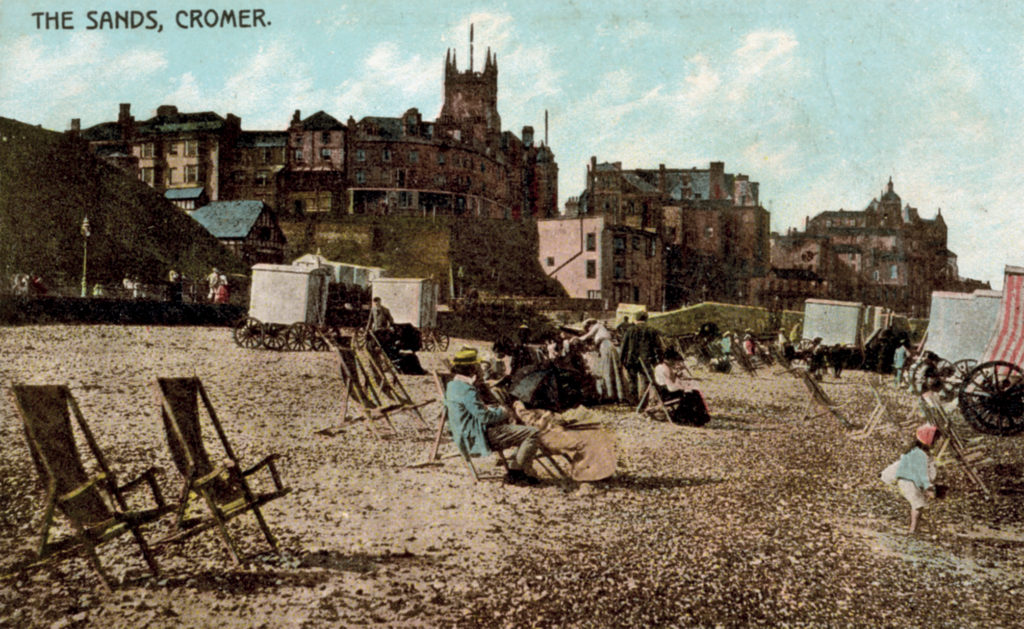 The beach at Cromer - undated, but the presence of bathing machines further up the beach suggests it may be early twentieth century. (The British Seaside, Amberley Publishing)[/caption]

For most of us, our stock of childhood memories include visits to the seaside. Hopefully, most of these memories will be happy ones, but the sea was not always the welcoming haunt of the holidaymaker. Going back to Old Testament times, the sea could be seen as the bringer of death and disaster (think Noah), or the home of mysterious gigantic creatures, ready to devour the unwary (as Jonah found out). People would generally only venture away from dry land if driven by the imperatives of earning a living or military conquest.

The change began around about the eighteenth century, when near-miraculous powers of rejuvenation started to be claimed for the seaside and sea water (and for its cousin, the inland mineral water spring). Before too long, well-to-do people were flocking in considerable numbers to the seaside, to drink and bathe in its water. The cure, as it came to be known, could last for a considerable time and there was only so much sea bathing or brine drinking that even the most assiduous patient could take. Other, hopefully less objectionable, diversions had to be found to fill the time, and it was from these that the seaside resort evolved. 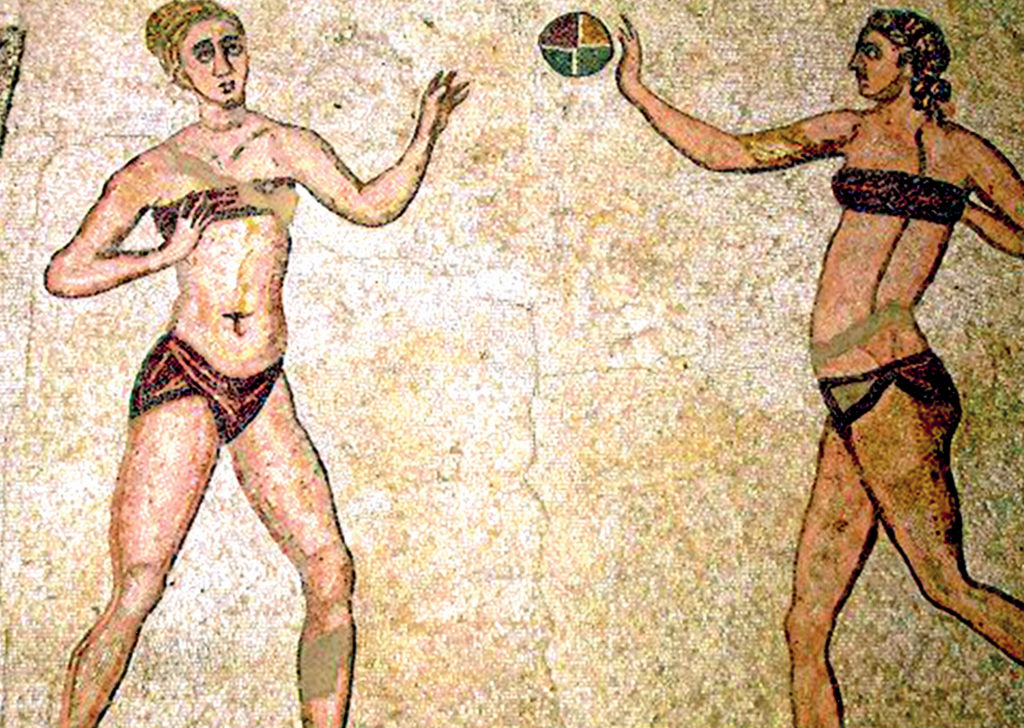 But it was with the coming of the steam ship and, more particularly, the railways, that the seaside began to change from the preserve of the leisured and rich to the holiday haunt of all but the poorest members of society. My book The British Seaside: an illustrated history tells the story of the transformation of the British coastal resort from a number of points of view.

One sometimes heated debate that has run for centuries has been the appropriate dress (or rather undress) code for sea bathing. Every school of thought has been represented in it, from those who favoured shapeless head to foot canvas garments, to variations on the next to nothing theme (culminating in nothing whatsoever). There was even the bathing machine, a species of garden shed on wheels in which the bather could be rolled into the sea, their modesty intact.

Given that it is a book about the British seaside, it could not ignore what happens when the weather rules out the beach. Seaside resorts have made several distinctive forms of architecture their own. Notably there was the pier, which started life as a purely functional means of getting arrivals by boat onto land with dry feet, before evolving into an all-singing and dancing palace of varieties. 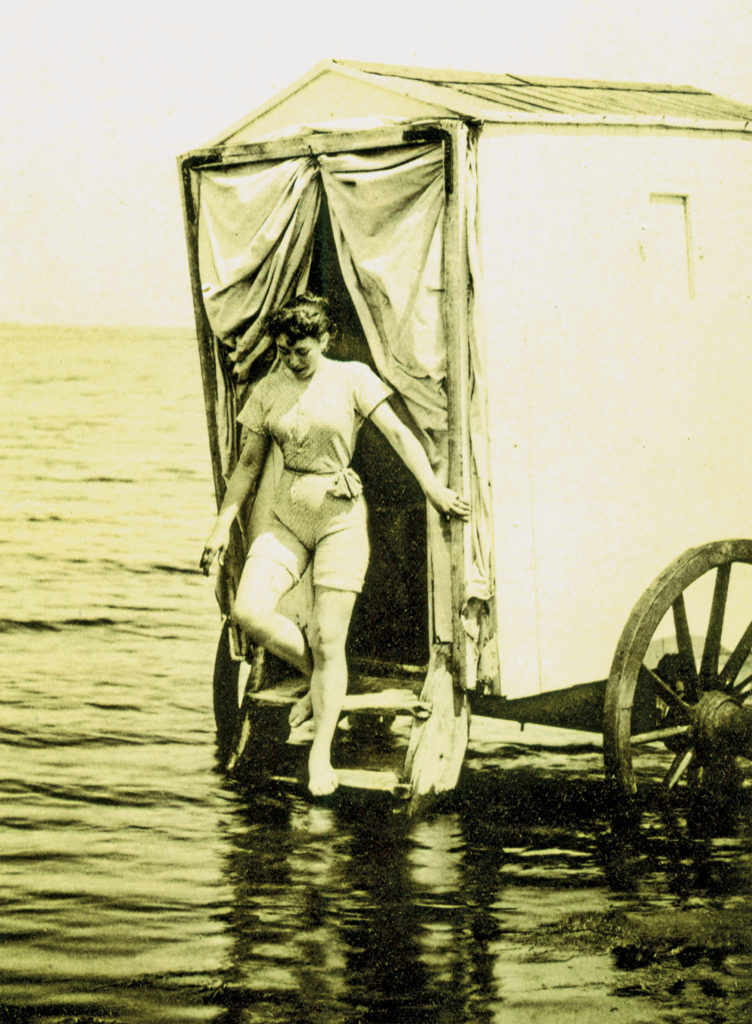 A rare photograph of a lady emerging from her bathing machine in about 1893. (Wikimedia Commons, The British Seaside, Amberley Publishing)[/caption]

Some individual seaside entertainments also had colourful histories. The “what the butler saw” machine had its origins in a scandalous Victorian society divorce case, in which the key witness was the butler, who apparently observed his employer’s dalliances through the keyhole of the dining room. The roller coaster had its origins in eighteenth century Russia and the first ones did not even have wheels – they were giant sledges, sliding down man-made ice hills to entertain visitors to Czar Catherine II at the Oranienbaum Palace, near St Petersburg.

Dodgem cars should correctly be referred to as bumper cars (Dodgem being a brand name for one make of them, patented in America in 1920). Some of the early ones were apparently very rickety indeed, liable to fall apart at the gentlest of impacts and with steering that bore only the vaguest relationship to the direction in which you were going.

Punch and Judy is a much earlier entertainment, appearing as it does in Samuel Pepys’ diary and with links back to Roman times and the Lord of Misrule. It gradually went from being an adult entertainment to one for children, and was softened in the process. The modern health and safety conscious Mister Punch is much less likely to murder the baby or feed it through the sausage machine, or to leave parents to explain his relationship to his mistress, Pretty Polly, to their children.

But one of the most striking seaside rides was developed in 1904 by Sir Hiram Maxim (inventor of the machine gun). This steam-powered ride (the Captive Flying Machine) was originally intended to give customers the sensation of operating a flying machine (Maxim had recently made a spectacularly unsuccessful attempt to construct the real thing). Perhaps wisely, the health and safety authorities of the day rejected some of Maxim’s more adventurous features, leaving him, as he saw it, with a toothless “glorified merry-go-round”. A version of this may still be seen at Blackpool. 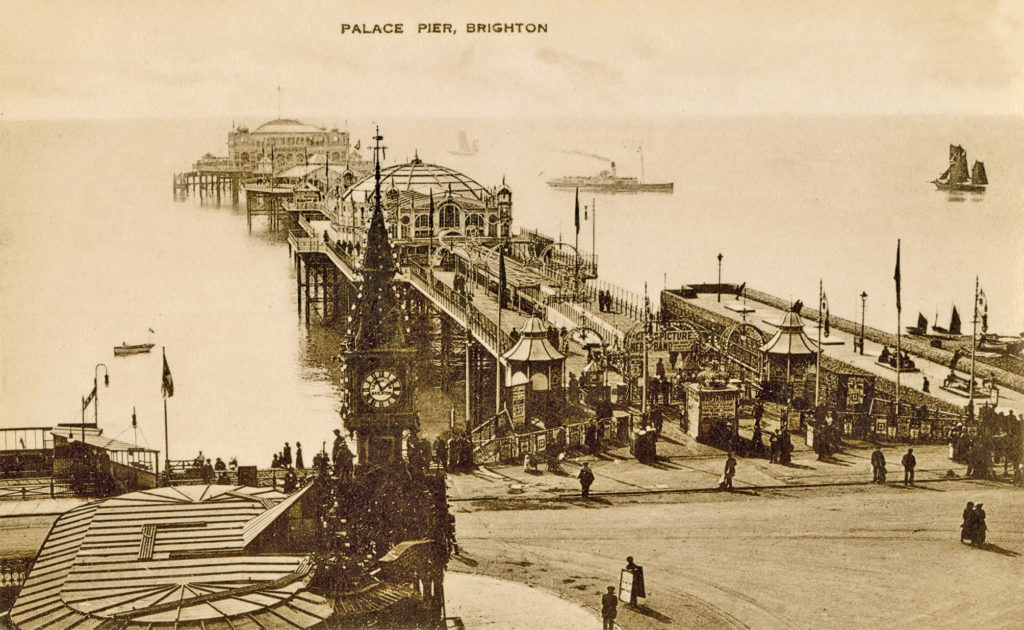 The Palace Pier, Brighton in about 1914. It was built in 1899 to replace the 1827 Chain Pier, destroyed in a storm in 1896. Today it is known just as Brighton Pier. (The British Seaside, Amberley Publishing)[/caption]

The Second World War bought an end to the seaside holiday, as many of the nation’s beaches were barred to the public, mined and covered in tank traps. Instead local authorities were encouraged to make worthy (if not universally successful) efforts to create holidays at home, turning parks, rivers or whatever amenities a town had to offer into makeshift “seaside” resorts. Even Punch and Judy got conscripted, with Hitler replacing the character of the hangman (whom Mister Punch invariably tricked into hanging himself).

But most of all this is an illustrated history of the seaside, and researching it has been a splendid excuse for visiting many of the country’s resorts, and collecting illustrations – ancient and modern - of their development over more than a hundred years. These pictures, and the thumbnail histories of the resorts that accompany them, form the second half of my book. 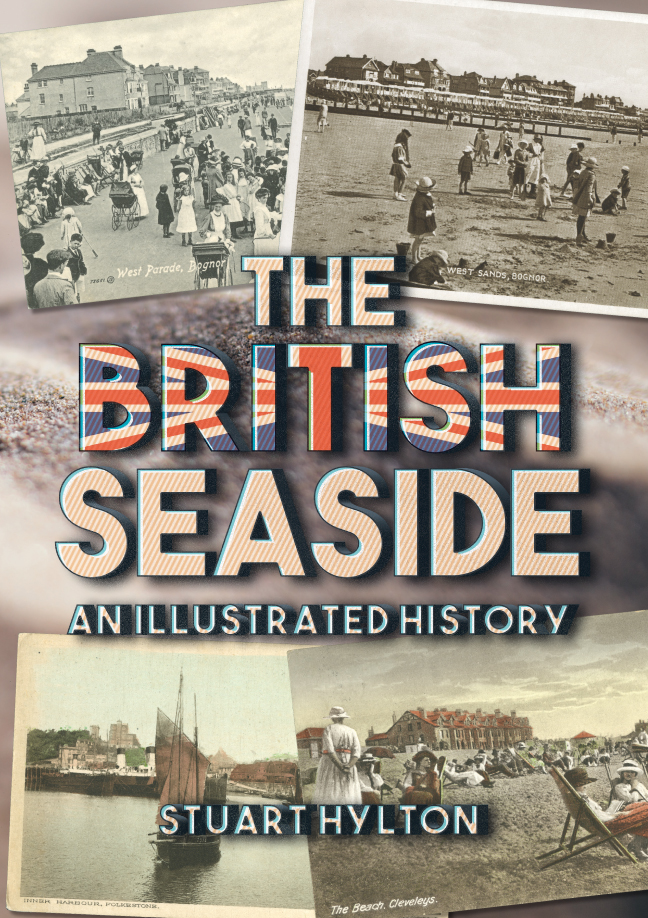