Warhorses of Germany by Paul Garson

The Myth of the Mechanised Blitzkrieg 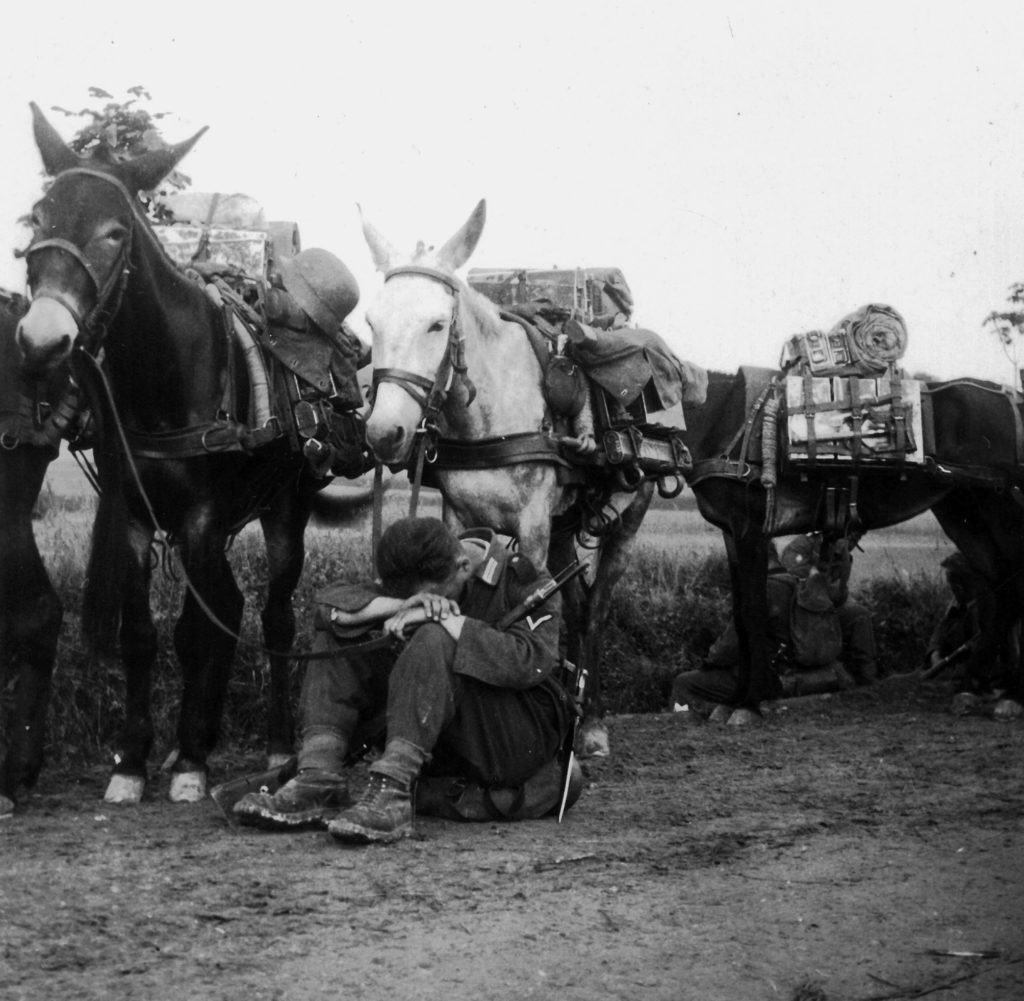 Nap - A corporal, his rifle clutched against his shoulder and the mule’s reins held in his hand, sleeps sitting on his backpack on a muddy Russian road as his charges eye the cameraman. (Warhorses of Germany, Amberley Publishing)[/caption]

The love of the horse runs long and deep in the German culture having arisen from the concept of “blood and soil” percolating up through the rural farmlands of the country, its people traditionally sharing close company with their equine work companions that also served as routine transportation and leisure enjoyment as well as an implement of war as called upon by centuries of conflict within and without its borders.

German military planners learned from their mistakes of the First World War, realizing that in part they did not have enough horses for the work needed. In preparation for the next conflict Germany began buying up large quantities of horses, in fact, many from Britain where its military planners saw no need for horses as they were certain the next battles would be fought exclusively by machine and thus the English military establishment totally scrapped its cavalry components. Between 1935 and 1940 Germany’s military horse resources swelled from 35,000 to 100,000, and that just the first of millions of hoof beats.

The various regions of Germany also produced several types of large draft horses, for example, The Black Forest Horse (Schwarzwaelder Fuchs). While strong, durable, healthy, long-living and good natured, many such horses were taken from their farm work to the Front where they encountered conditions for which they were ill-prepared. 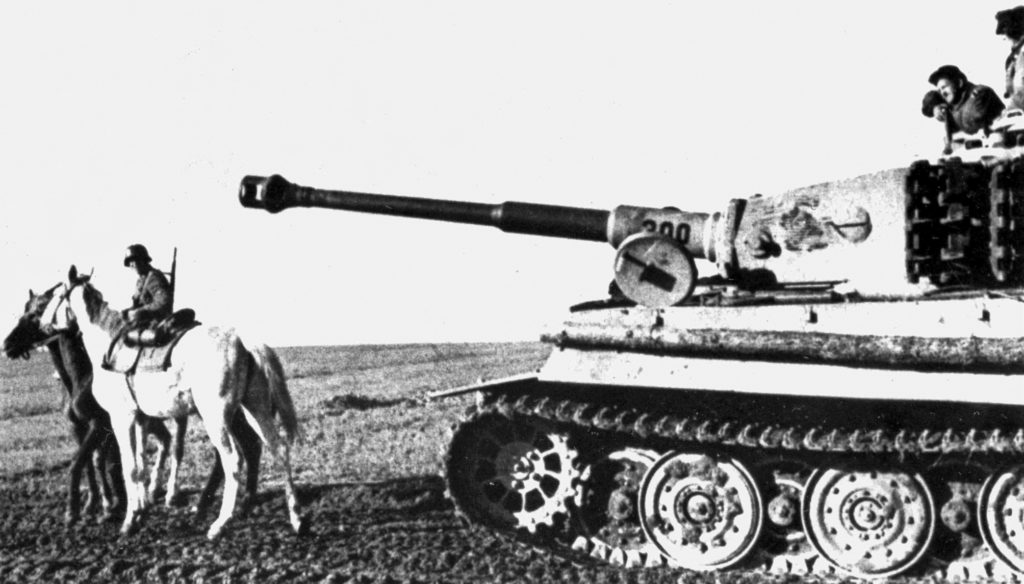 Hooved vs. Tracked - Two cavalry mounts are dwarfed by the formidable Tiger tank. Contrary to the Third Reich’s own massive propaganda programs and decades of post-WWII movies that propagated the image of German fully motorized warfare, horses far outnumbered tanks and other mechanized weapons of the Third Reich. (Warhorses of Germany, Amberley Publishing)[/caption]

In reality the Wehrmacht was the least modernized of European armies with Third Reich propaganda creating a distorted image of the true state of affairs. 1930s Germany was not supported by a strong motor vehicle or even farm tractor infrastructure that could be militarized for war production, nor were its people “automobilized” to any great extent. By contrast, in 1935 America, there was one car per five people while in German the number was only one car per 89 people.

The Wehrmacht attempted to augment its mechanization efforts during the war by utilizing Czech and French machines, but there was a language problem when dealing with manuals for the former and a lack of reliability with the latter, especially when facing the demands of the Eastern Front. Some 2,000 different kinds of vehicles eventually took part in the invasion of the Soviet Union, the complexity and variation creating a maintenance nightmare. The logistics requirements projected the demand for an additional 2,700 trucks which could not be supplied, thus horses again making up for the shortage. For example, the 9,000 captured French horses proved more enduring than its vehicles. In the final analysis, only some 25% of the Germany army was mechanized while 75% was composed of marching infantry with 70% of all transport and supply including heavy artillery during the war was horse-drawn. Due to their size and the fact they were often tethered to heavy transport wagons and field artillery, horses were left to take the brunt of air attacks while their human counterparts sought cover. In addition the effects of bullet, bomb and fire, the rigors of traversing vast distances thereby suffering the results of climate, disease and food deprivation, those horses deemed no longer suitable for work, were either sold as food or slaughtered on the spot to feed starving troops. 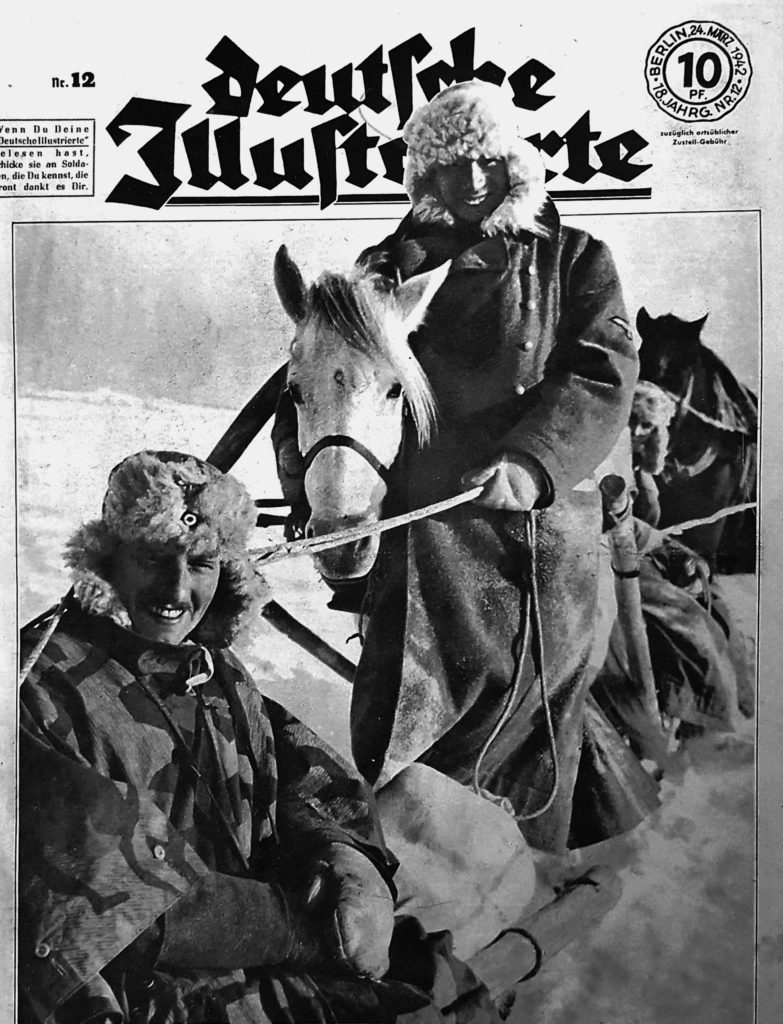 War on the Eastern Front -March 24, 1942 – Deutsche Illustrated – Berlin - 'Soon Winter in the East will also be Overcome!' reads the caption accompanying the image of Waffen-SS troops who are grinning for the camera despite being caught in the frozen grip of Russia’s lethal 'General Christmas', which is reality was not overcome but overwhelming. (Warhorses of Germany, Amberley Publishing)[/caption]

The number of horses and mules used by the German military eventually amounted to 2,750,000. Of them, an estimated 750,000 died during the war. The number of Russian animals that perished is unknown but estimate as equally massive.

Author Paul Garson, a Los Angeles based journalist for some 30 years writing about a variety of subjects, his articles often including his own photography, developed a focus on original Second World War original photos 15 years ago after chancing upon one image. It would lead to the viewing of over one million photos from a dozen countries eventually forming his personal collection of some 3,000 in addition to several hundred research books, documents, artifacts and other items from which to conduct his research. To date, five books relating to the subject have been published, several more in the works, all providing readers with a previous unseen vantage point of the war in Europe including the volume seen here.

Says Garson, “For years I often spent 12-14 hours, seven days a week searching for the most compelling images, then hours more repairing via digital enhancement those decades old photos, some barely two inches square. Then hours more exploring the image itself as well as relating it to a specific date and location in order to place it within the historical context, all in order to cast some light onto those darkest of times. In this case, I was compelled to write, and show, the fate that befell the millions of horses that were leashed and lashed into the catastrophic war, one whose violence and cruelty spared no living thing …the goal perhaps to offer a visual warning that strips away the “glamour” that war films had often created and to show its true nature …and the pain suffered by non-human combatants who had no voice to share their suffering.” 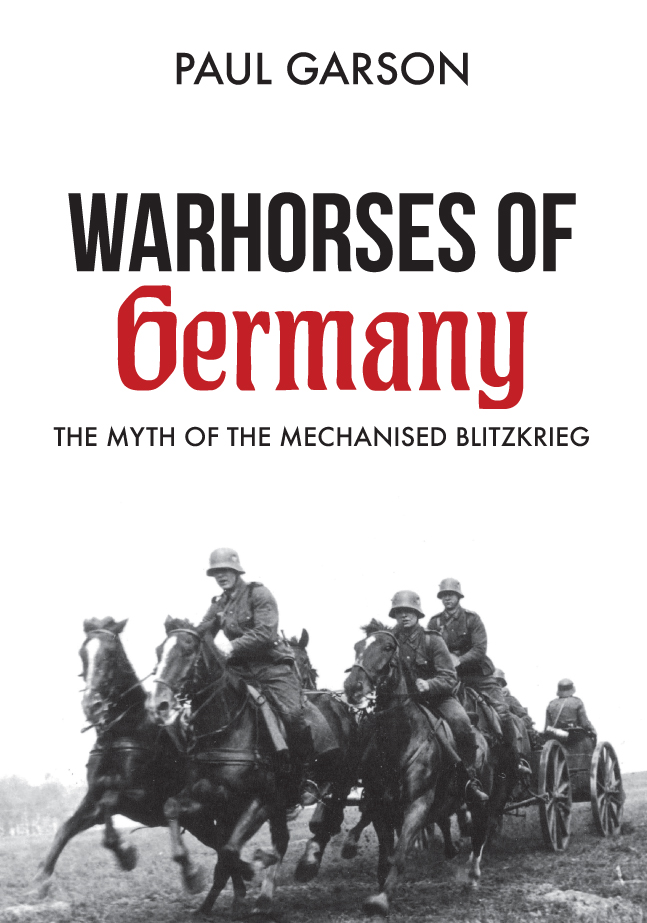 Paul Garson's new book Warhorses of Germany: The Myth of the Mechanised Blitzkrieg is available for purchase now.