Great Britain has one of the oldest judicial systems in the world. Our common law can be traced back to the Middle ages, the jury system as its cornerstone, with the basic tenet that a person is innocent until proven guilty. The law of course cannot stand still and has to move with the times to be fit for purpose in relation to Britain’s ever-changing social and economic traits, even to the point of questioning the effectiveness of the jury system in some cases. My latest book: Convicted: Landmark Cases in British Criminal History outlines 100 such cases that have strengthened this country’s reputation for fairness and justice. Each of these cases or methods of crime detection were presented to a court of law and tested as far as their legality and credibility and each has changed or affected the process of law enforcement in this country.

The Cotswold village of Chipping Campden was the centre of one of Britain’s most extraordinary criminal cases, dubbed the ‘Campden Wonder’, which resulted in an historic ruling that would survive well into the twentieth century. On 16 August 1660 local businessman William Harrison left his home in Chipping Campden to collect some rent from neighbouring farms. When he failed to return home that night his son, also called William, and his manservant – John Perry – set out to find him. On the route they expected William to have taken they discovered some personal items and clothing belonging to the missing man, some were covered in blood. An investigation took place; John Perry initially blamed his mother and brother for the murder but eventually all three stood trial for the killing of Harrison even though Harrison’s body was never recovered. All three were found guilty and executed.

A year after the executions the close-knit community were shocked to learn that the ‘victim’ of this horrendous crime – William Harrison – had returned to the village in full health with an incredible story. He informed the authorities that on the night in question he had been violently abducted by several men and taken to the Port of Deal where he was bundled onto a Turkish ship and later sold as a slave. Following the death of his elderly master he managed to escape and concealed himself on board a Portuguese ship and travelled to Dover. Following this incredible miscarriage of justice resulting in the execution of three innocent people British courts followed a principle of ‘no body, no charge of murder’. This principle was maintained well into the twentieth century when advances in forensic science in such cases as George Haigh – the ‘Acid Bath Murderer’ proved beyond doubt that murder had taken place without the need for a body to be present. 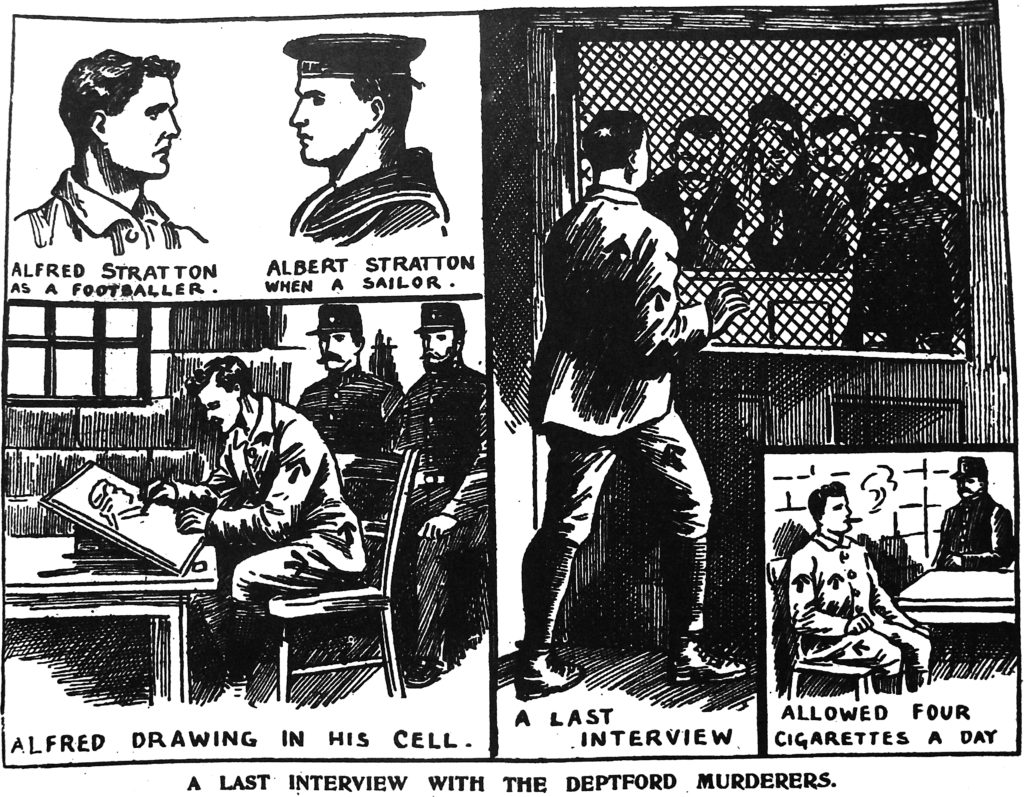 A feature on Albert and Alfred Stratton, the first murderers to be convicted on fingerprint evidence. (Illustrated Police News, 27 May 1905, Convicted, Amberley Publishing)[/caption]

The estimated odds of billions to one that two human beings shared the same fingerprint (including those of twins) became the basis of the most important discovery in the world of crime detection. Edward Henry a member of the Indian Civil Service and Inspector General of the Bengal Police devised a workable system for classifying fingerprints. Henry, who was appointed Assistant Commissioner of Crime at Scotland Yard in 1901, established the Fingerprint Bureau. Initially the primary function of the Bureau was to enable police to identify offenders with previous criminal convictions; but within a short period of time the science of fingerprint identification would evolve into an effective tool in crime detection.

The first criminal conviction, using a fingerprint as prime evidence, was the case of habitual thief Harry Jackson in September 1902. Jackson was suspected of several burglaries in south London and eventually arrested by a sharp-eyed police constable called George Drewitt whilst attempting to break into the Perseverance Pub on Vassal Road in Brixton. One of the burglaries leading up to his arrest occurred at 156 Denmark Hill the home of the Tustin family; Jackson had gained entry through a ground floor window and stolen a number of ivory snooker balls but whilst doing so had left a fingerprint on a recently painted window sill. The fingerprint was examined by officers from the fingerprint bureau and positively matched to Jackson. When the case was tried at the Central Criminal Court Old Bailey Jackson pleaded not guilty. This was a make or break case for the forensic science of fingerprint examination as the whole case rested on one fingerprint which placed the defendant at the scene of the crime. The evidence was strongly tested by the court with officers from the fingerprint bureau giving expert testimonies. The judge and jury accepted the validity of the evidence and convicted Harry Jackson. Many commentators of the day still doubted the new crime-fighting revelation; one wrote to The Times commenting that ‘Scotland Yard, once known as the world’s finest police organisation, will be the laughing stock of Europe if it insists in trying to trace criminals by odd ridges on the skin’. 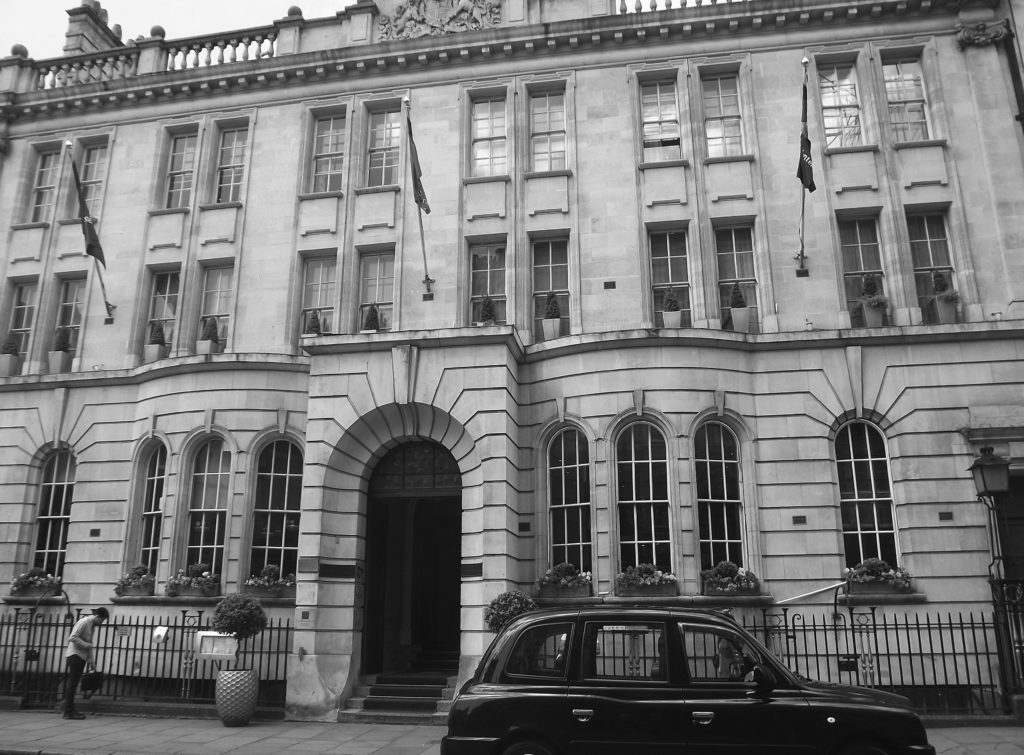 The former Marlborough Street Magistrates Court, which witnessed the first recorded trail for the offence of drink-driving in 1897. (Author's collection, Convicted, Amberley Publishing)[/caption]

A licensed cab driver was observed, by local police officer PC Russell, driving his cab erratically along Bond Street in London at 12.45am on 11 September 1897. George Smith swerved from one side of the road to the other before running across the footway and crashing into No.165 breaking a water pipe and causing damage to the property’s front window. PC Russell approached Smith and realised that he had been drinking and escorted him to Vine Street police station in what is believed to be the first recorded case of drink-driving. Smith was examined by a local police surgeon who confirmed his drunkenness and that he should not have been in charge of his vehicle.

Smith was charged and appeared in front of the magistrates at Marlborough Street police court later that same morning. When questioned by PC Russell in front of the bench he admitted that he had consumed several glasses of beer. The magistrate in sentencing Smith to a fine of twenty shillings advised the cabbie: ‘you motor-car drivers ought to be very careful, for if anything happens to you – well, the police have a very happy knack of stopping a runaway horse, but to stop a motor is a very different thing’. 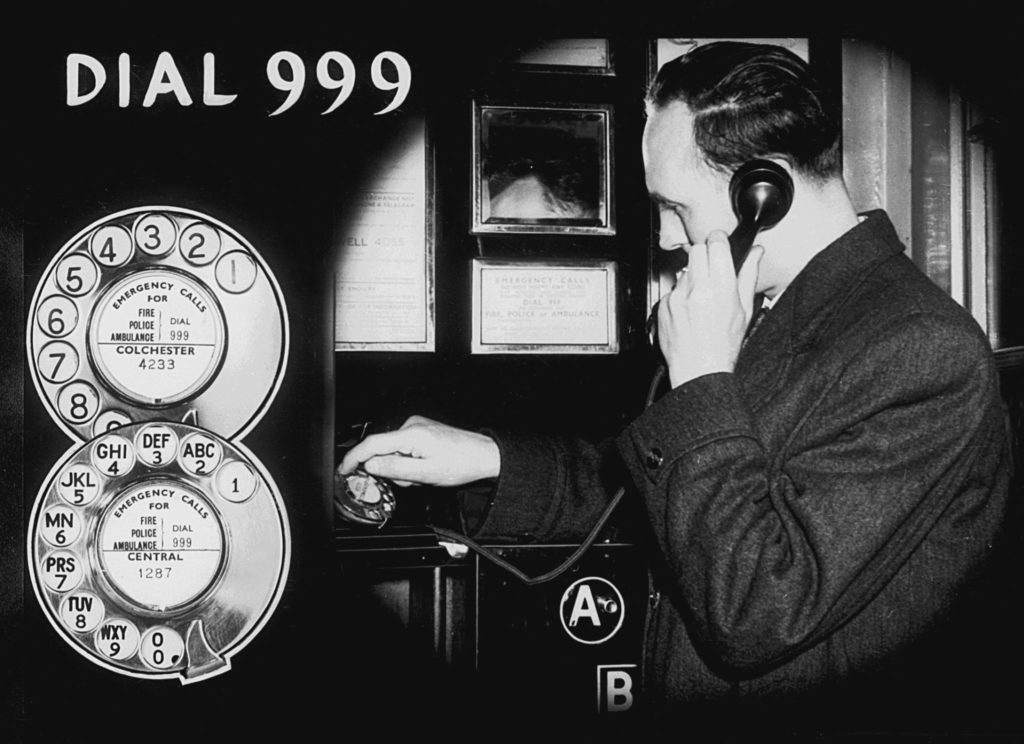 Burglar Thomas Duffy was the first to be apprehended and convicted through the new emergency hotline introduced in 1937. (Convicted, Amberley Publishing)[/caption]

An innovative emergency telephone system, where any member of the public could pick up a telephone and dial 999 free of charge, operated by the General Post Office was launched in London on 30 June 1937. The launch of the system was accompanied by a public education campaign in several newspapers including the London Evening News which advised its readers to:

‘Only dial 999 if the matter is urgent; if, for instance, the man in the flat next to yours is murdering his wife or you have seen a heavily masked cat burglar peering around the stack pipe of the local bank building… If the matter is less urgent, if you have merely lost little Towser or a lorry has come to rest in your front garden, just call up the local police.’

The new 999 system quickly proved a success when just a week later the first arrest was made as a result of such an emergency call. During the early hours of 7 July 1937 architect John Stanley Beard of Hampstead in north London had been awoken by a noise outside his bedroom window. As he peered out he saw a would-be intruder, later identified as Thomas Duffy. Beard’s quick-thinking wife rang 999 and gave a description of the suspect and a direction in which he had decamped. Police acted quickly and arrested Duffy nearby; he was charged and convicted of attempted breaking and entering. Mr Beard was delighted with the result and commented after the event that: ‘…it struck me, as a householder and fairly large taxpayer that we are getting something for our money and I was very impressed by it.’

During the first week of the 999 launch police received 1,336 calls -ninety-one were pranks. The service was launched in Glasgow the following year followed by several other major cities; but the rest of the country had to wait until 1976 for the system to become national when all telephone exchanges became automated. Today the 999 system (now incorporating all emergency services) receives in excess of thirty-million calls a year.

Put Your Foot In It

Plantar evidence (the anatomy relating to the sole of the foot) was first used in the English courts in 1956.

Sydney Malkin was a 47-year-old chef who had a penchant for women’s underwear. In 1956 he broke into the Hastings flat of Mrs Edith Bowles and stole items of underwear and a silk slip. Mrs Bowles, whose flat was on an upper level, had left her underwear out to dry with the windows open. Mrs Bowles reported the crime to local police officer – PC Ernest Parker. Parker examined the point of entry and was astonished to discover a number of bare footprints – one on top of the television, one on a loudspeaker and finally one on the floor. The unusual modus operandi of stealing women’s underwear from high-rise flats matched Sydney Malkin. He was arrested and comparisons were examined between the footprints left at the crime scene and impressions taken of Malkin’s feet – they were identical. Fingerprint expert Detective Superintendent Holten from Scotland Yard presented his findings to the magistrates at Hastings. Malkin was convicted – the first case of its kind in England – and bound over to keep the peace for three years. 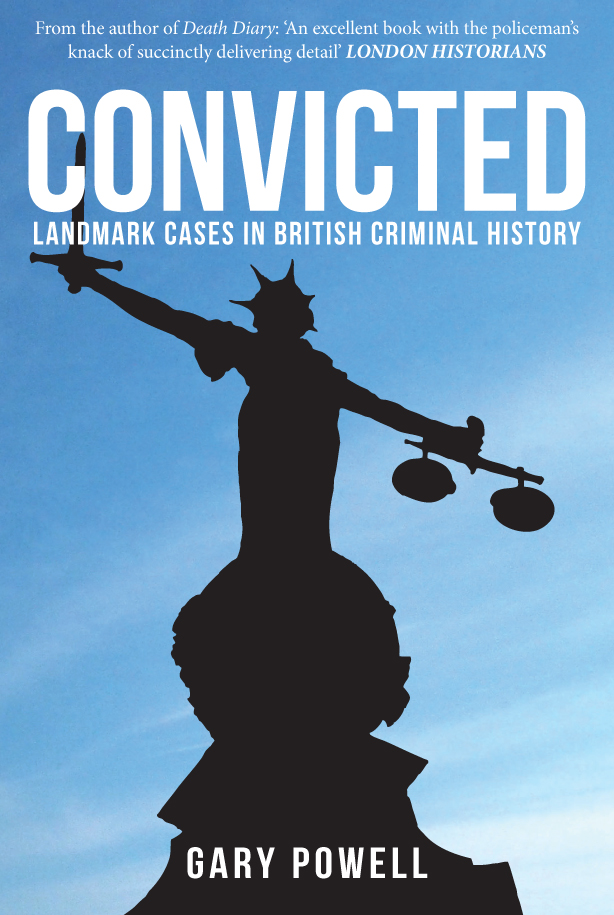