The Seventies Railway by Greg Morse 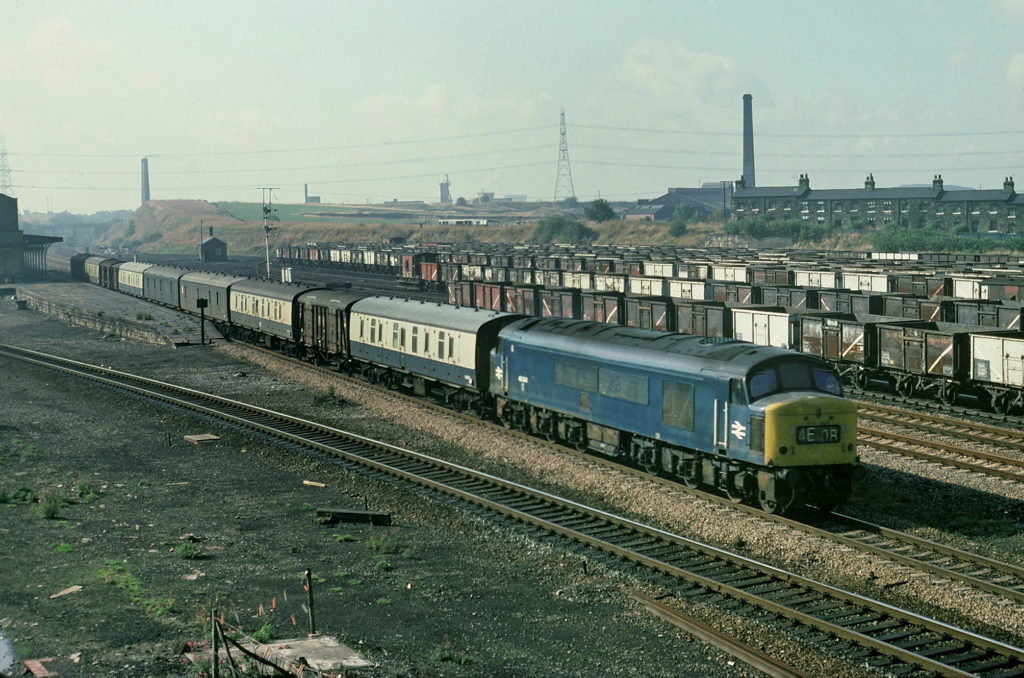 A Class 46 on a 'parcels' in 1975, by which time Post Office traffic had dropped from its peak. (c. Colour-Rail, The Seventies Railway, Amberley Publishing)[/caption]

My earliest memory of the real railway is of the prototype High Speed Train plunging under a bridge near my Swindon home, but I got a much better look later in 1975 when a certain D1023 brought a long (long!) freight to a stand at the station while I was there with my Mum and Dad.

I was completely rapt by the locomotive, which was long, blue and sleek, which seemed to block out the sky.  Though I was yet to start taking numbers, I did notice a long, black nameplate on the side. It said Western Fusilier.  I had no idea what a fusilier was, of course, but I knew I liked the word.

All-too-soon the signal went green, the right of way was received and the big beast growled and moved forward. Before I knew it, the brake van's oil lamp was twinkling in the moonlight and it was gone. 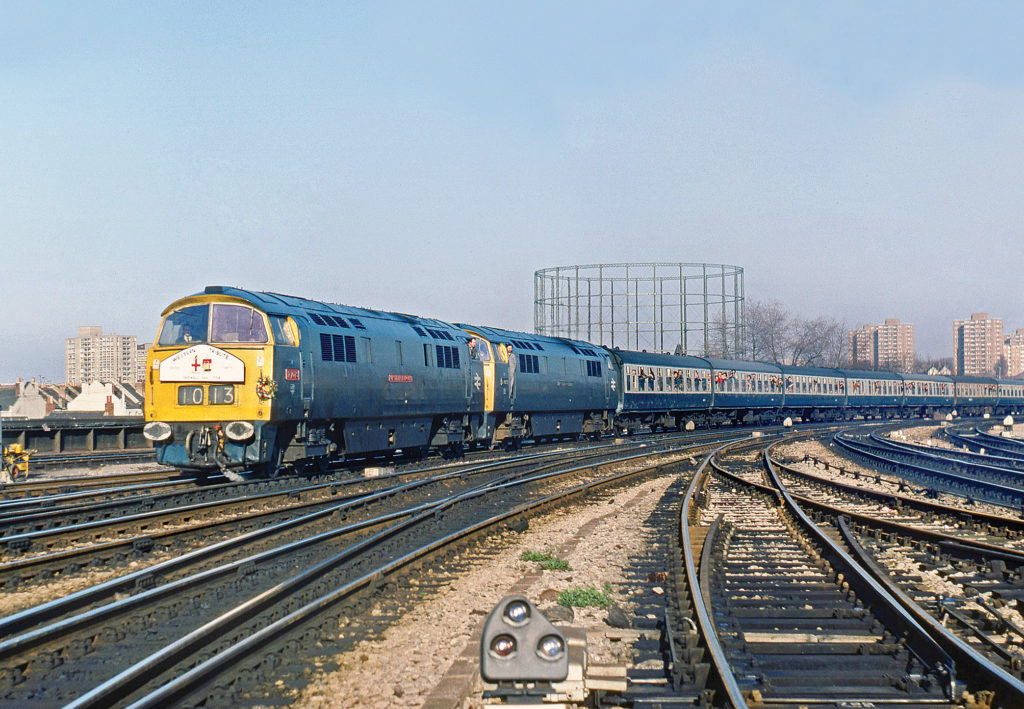 I only saw one more ‘Western’ – though I didn’t know it – for I was witnessing an end and not a beginning. Anyone older (and wiser) than me would probably have been chasing the class on railtours like the ‘Westerns South Western’, ‘Western Talisman’ or ‘Western China Clay’, or making pilgrimages to the Graveyard – the Graveyard of the Diesels at Swindon Works, where many withdrawn examples sat forlorn, their fading paintwork peeling slowly in the sun.

The writing had been on the wall not long after they’d started entering traffic in 1961, BR deeming their hydraulic transmission systems non-standard just four years later. Though the ‘Westerns’ and some of their five counterparts had been largely successful, all British Rail’s other regions were equipped to maintain diesel-electrics, which were also cheaper to build and maintain. Withdrawals were such that by April 1975, the ‘Westerns’ were the only type left in service. As they lacked the room to house the electric train heating equipment required by BR’s newer carriages, and as more of their work was taken (first by Class 50s usurped from Anglo-Scottish services by electrification, then by brand-new HST), their numbers ebbed and ebbed to the point that by February 1977 it was almost all over. 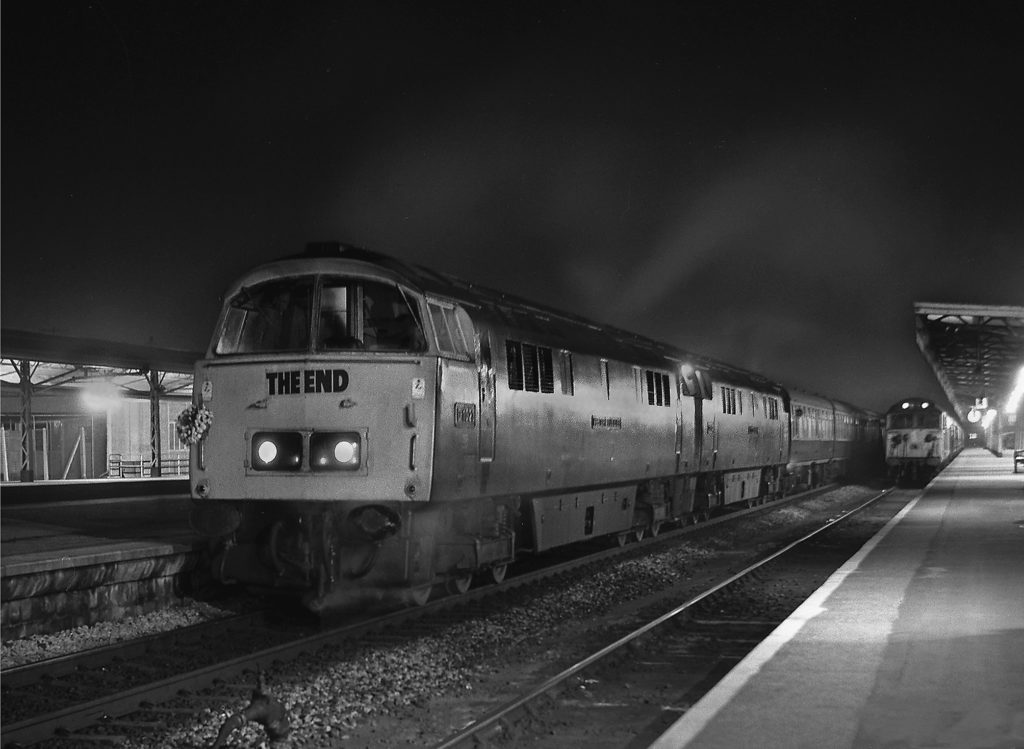 It's around 21.15 on 26 February 1977, and with the suitably adorned D1023 now leading, the 'Western Tribute' tour prepares to leave Taunton for the final run back to Paddington. (c. Rail Photoprints, The Seventies Railway, Amberley Publishing)[/caption]

Imagine it’s Saturday 26 February, it’s half-eight, it’s sunny, it’s cold and you’re at Paddington for BR’s ‘Western Tribute’ tour. The action’s all on Platform 2, where a phalanx of spotters, rail fans and enthusiasts vie for a view of Westerns Ranger and Fusilier at the country end. Cameras click, microphones rise, rubbings are taken – you’d think the nameplates were seventeenth-century church brasses.

Departure comes with an almighty roar, as the mighty duo draw the train over the points and on towards Westbourne Park. By the time they return – having taken in Swindon, Bristol, Bridgend, Swansea, Plymouth, Taunton and Reading – it will be twenty-to-midnight. Fusilier will return to its birthplace to be preserved for the nation; Ranger will make for Plymouth Laira, where it’ll shunt a few wagons on the Monday morning, before towing the ‘Tribute’s’ two understudies – Campaigner and Lady – to Newton Abbot. When the driver powers down, takes out the master key and climbs from the cab, that’ll be it…Ranger will range on BR no more.

The End was covered on the local television news, it was covered in The Guardian too. No one had shed many tears when BR’s early diesel failures had been withdrawn, but those had died in the days of steam. The ‘Westerns’ might have seen off the Great Western’s mighty ‘Castles’ and ‘Kings’, but for younger believers, they were a favourite and their loss was much mourned. Of course it all made perfect sense if you were trying to run a railway, but still... thank goodness for memories. Thank goodness for preservation. 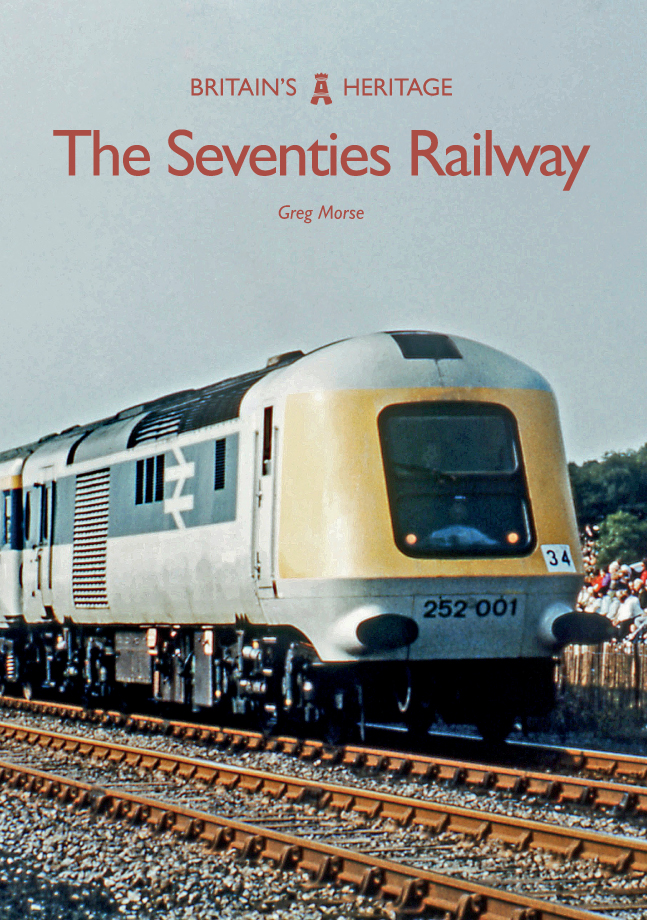