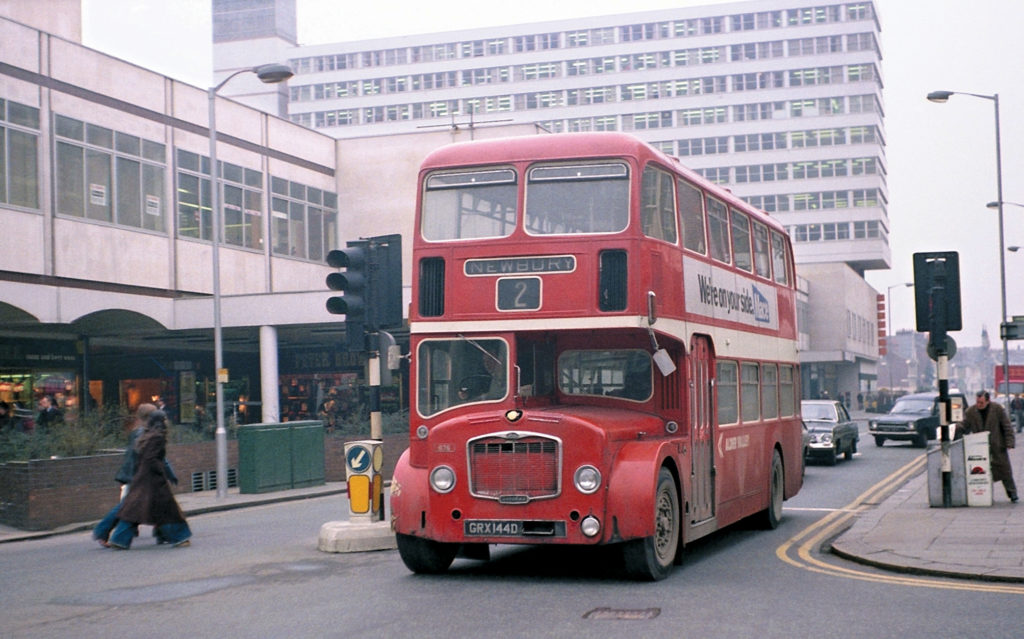 By the mid-1970s the FLF Lodekka was well into the second half of its lifespan, but it was still a familiar sight almost everywhere. Alder Valley's Gardner-engined No. 676 (GRX I44D) leaves Reading for Newbury on WEdnesday 18 th February 1976. (Bristol Lodekkas, Amberley Publishing)[/caption]

The design problems of double-deck buses were basically two: to keep the height as low as practicable and to maximise seating capacity within the available dimensions. In the early days of the motor bus a full-width cab was placed behind the engine and the passenger-carrying bodywork was simply grafted onto the chassis behind them. This primitive configuration, known as 'normal control', squandered much passenger-carrying, revenue-generating space: in the years before the Second World War it gradually disappeared, to be replaced by a new spatial arrangement known as 'forward control'. In this, a half-width cab was placed alongside the engine, allowing the upper deck to be extended forward over the top of it.

This optimised the use of space, but the difficulty of headroom remained. Damage to bodywork caused by overhanging branches was the least serious aspect of the problem: almost every bus operator had to contend with low railway bridges, which made it impossible to operate double-deckers on certain routes. This meant using single-deckers at more frequent intervals, with all the associated extra costs. To reduce height a very unsatisfactory alternative layout was developed: the gangway of the upper deck was placed to the offside and recessed into the ceiling of the lower deck. Not only did this imperil the heads of those passengers who were incautious in rising from the seats beneath, but the four-abreast seating of the upper deck was inconvenient for conductor and passengers alike. This, the hated "lowbridge" layout, made such buses, sometimes known as "skittle-alleys", about a foot lower than the standard height. 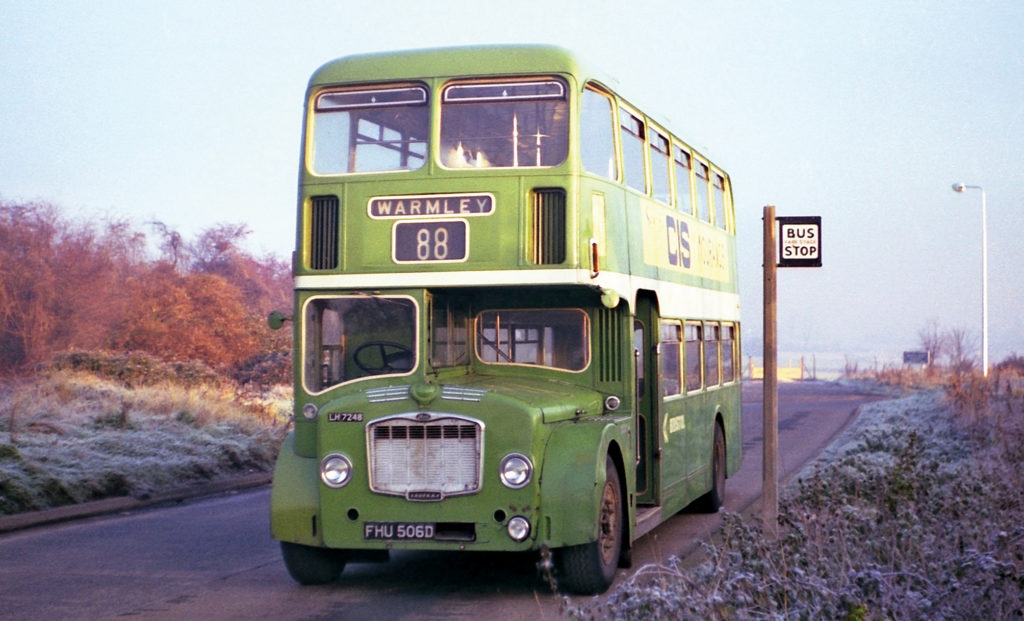 The NBC's standard 'leaf green', even when fresh, was not the most beguiling of liveries and always looked dowdy by the time a trip to the paint shop was due. (Bristol Lodekkas, Amberley Publishing)[/caption]

It was to address the "lowbridge" problem that the Bristol Lodekka was developed. Bristol Tramways constructed two prototypes, which took to the roads in 1949, one in the company's own operating fleet and the other with the West Yorkshire Road Car Co. The new vehicles great innovation was a re-designed transmission in which the propeller shaft was offset to one side and drove a drop-centre, double reduction rear axle. The lower deck gangway no longer needed to clear the shaft and could pass through the dropped middle section of the axle. The step from the entrance platform to the floor of the lower deck was eliminated (in the early days many passengers came a cropper when attempting to mount this vanished step) and the entire vehicle could be correspondingly lowered. It became possible to provide conventional upper deck seating within "lowbridge" dimensions. The lowbridge bus became obsolete overnight.

The prototypes (which I know only from photographs) must have been the ugliest buses ever constructed. They had massively wide radiators, a bizarre front bumper, ill-considered window-spacing and their reduced height did not conduce to shapely proportions. The first production vehicles, dubbed the LD-type, appeared in 1953. The body builders, Eastern Coach Works of Lowestoft, had espoused the 'new look' front (a lamentable fad in post-war bus design) in which the engine, radiator and nearside wing were enclosed within a rounded structure called a cowl. The squat, bulbous lineaments of the bus gave it a faintly toad-like appearance, but in the late 1950s new regulations permitted the construction of 30ft double-deckers, and a facelift of 1962 resulted in an improved frontal treatment. These changes considerably improved the vehicles looks. By the time production ceased in 1968 extended bodywork, which mostly went to Scotland, had made the Lodekka a handsome and imposing bus, able to accommodate 78 passengers. It was also made available with semi-automatic transmission and a larger engine, the 10.45-litre Gardner LX. 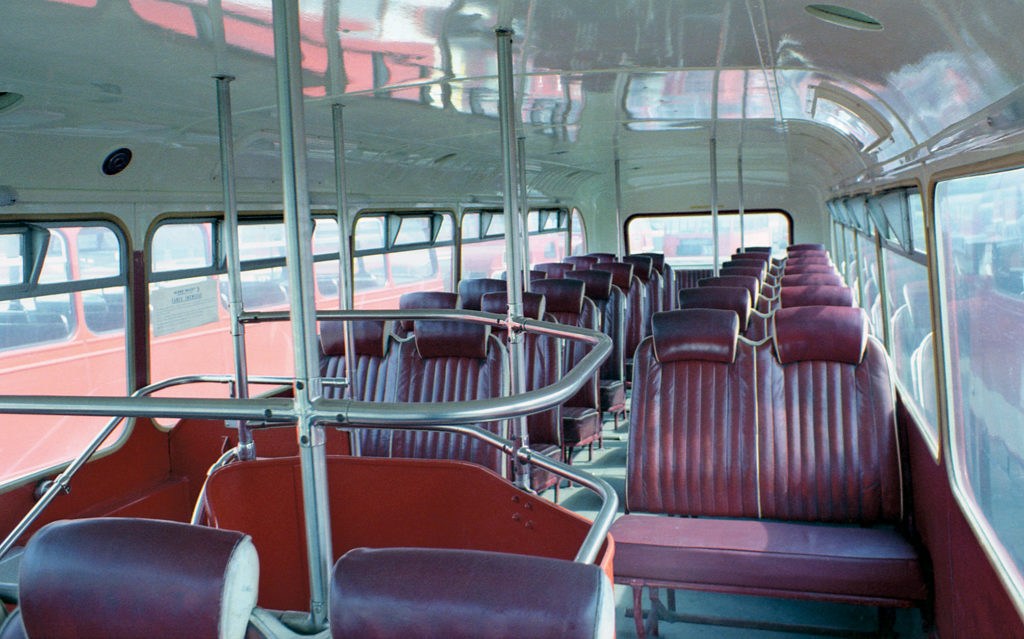 My book, Bristol Lodekkas, is a selection from photographs I took during many enjoyable journeys around the country between 1975 and 1980. The Lodekka was clearly nearing the end of its tenure, but as the period opened was still a familiar sight almost everywhere. In Scotland, where well-tried types had tended to be ordered for as long as they were available, the earlier versions were still numerous. I give an account of the motives that led me to take the photographs, and of my long association with the Lodekka as both passenger and professional busman.

The Lodekka represented the final form of the half-cab, front-engined, double-deck bus that was a familiar feature of the streets for fifty years and an 'iconic' British vehicle recognised the world over. Alas, it required a crew of two and the economics of the modern industry made it obsolete. Bus operators, or their accountants, now demanded vehicles suitable for driver-only operation. The need to place the passenger entrance alongside the cab entailed the rear transverse-engine layout that remains with us to the present day. Mechanically, this configuration is far from satisfactory and I imagine many of today's bus company Chief Engineers must repine for the simple, rugged workhorses (such as the Bristol Lodekka) available to their counterparts forty years ago. 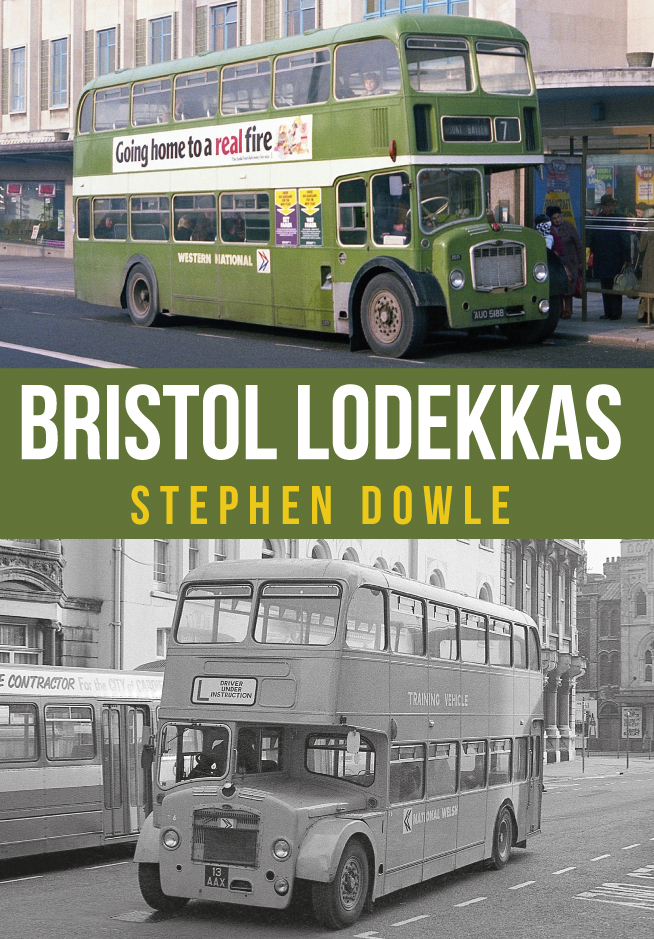