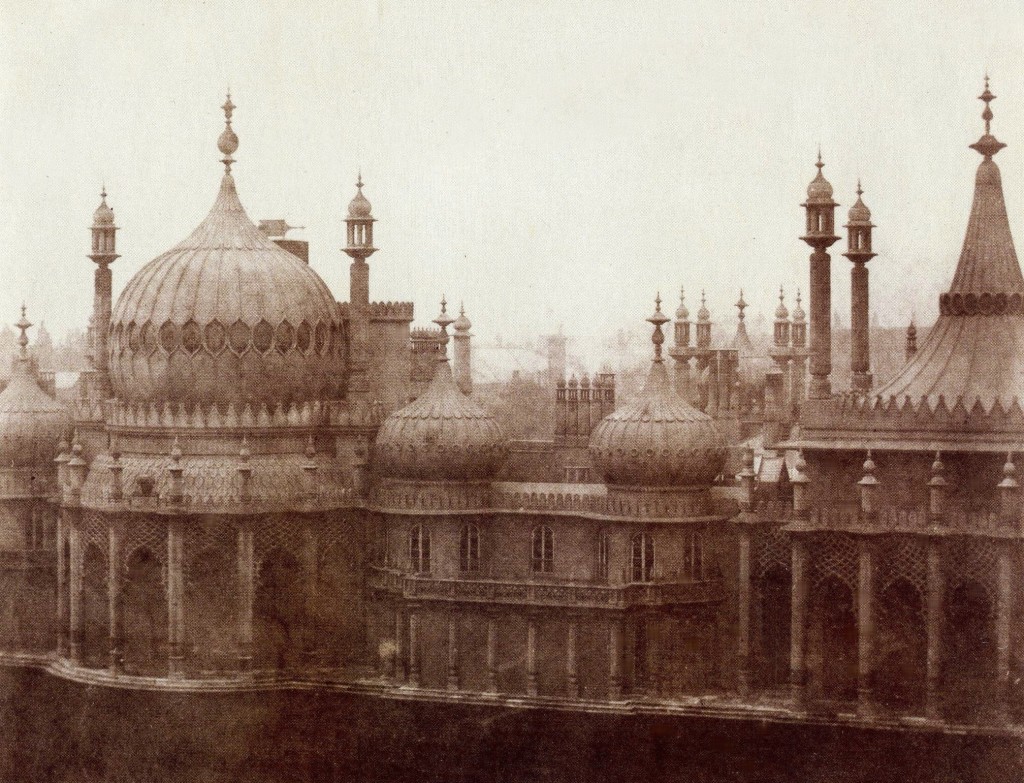 The Royal Pavilion 1846 one of the earliest photographs taken in Brighton (c. Phillipe Garner, Brighton From Old Photographs, Amberley Publishing)[/caption]

Another book of old Brighton photographs? There have been so many over recent years (and I’ve written seven of them!) it might seem there really isn’t the need for another.

What’s different about this new book is it contains a large number of really old photographs of the town, some dating to the 1840s. I doubt if any other seaside resort has pictures from this decade. Even the nation’s capital, London, doesn’t have a significant number of views from this period.

To put the earliest photograph in the book into context, Brighton’s most famous resident and patron, George IV, died in 1830. Just sixteen years later, we get our first photograph of Brighton – taken in 1846 - and it’s fitting that it’s a view of the Royal Pavilion, George’s seaside residence in the town. He was succeeded by his brother, William IV, another monarch to take a liking to Brighton, whose reign ended in 1837. Queen Victoria, William’s niece, then became monarch, but she found Brighton people repellent, and the cost of maintaining the Pavilion a real burden, and so sold the building off, in 1850, to the town’s Commissioners - the group responsible for administering local government then. The price was £53000, but this didn’t include any of the furniture, fixtures, and fittings, which she had removed. Over 140 van-loads of items were taken away, leaving the place a shell. One observer said the place, ‘looked like it had been plundered by Cossacks.’ Even tiny items, like plant pots and gardening tools were sold off. The job of restoring the Pavilion to its former glory took many decades. 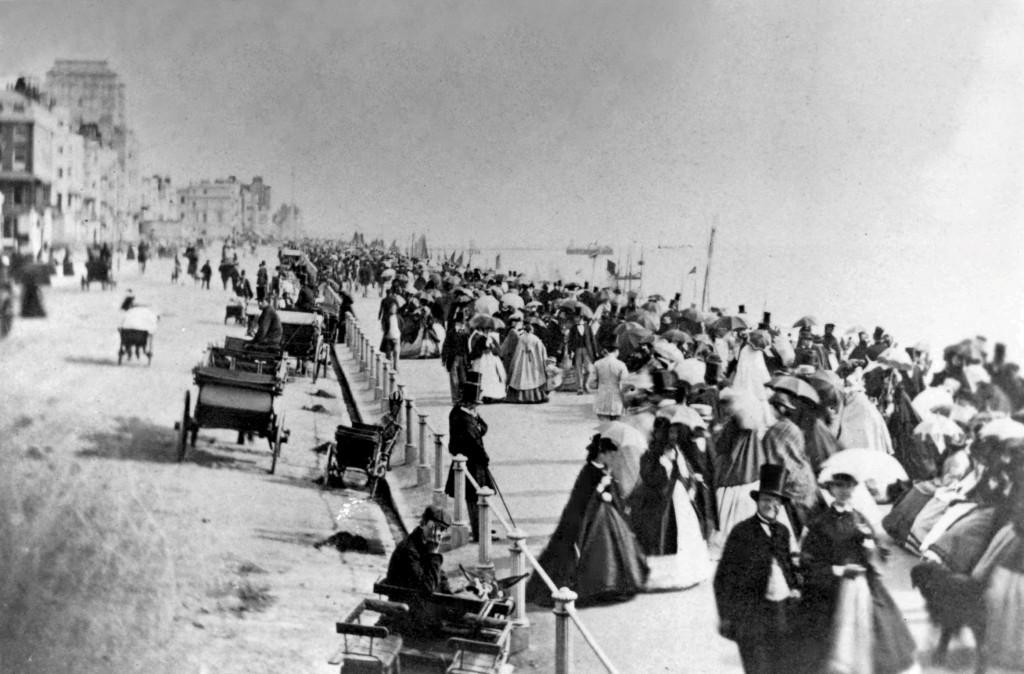 This animated 1863 view looks east before the West Pier was built, with plenty of period fashions to be seen. (Brighton From Old Photographs, Amberley Publishing)[/caption]

The Pavilion estate, with its stabling (now Brighton’s Dome concert hall), and riding school (the Corn Exchange) form the first section of the book. There follow sections everyone will be expecting, featuring views of the beaches and promenade area, the piers (three of them), plus the main seafront roads and their hotels. I was pleased to put in a section on theatres and early cinemas, which often get neglected, and there are sections on the Old Town area (including the famous Brighton Lanes), the oldest streets - East Street, West Street and North Street – and also a large section on trade and industry. This last one will surprise some readers, as Brighton is not really known as an industrial town. Yet its North Laine area contained many factories, foundries and workshops, while at Brighton Station, a huge area became one of Britain’s major locomotive building centres, employing, in Victorian times, some 2000 people, making railway engines from scratch, turning out one a month. The book ends at the period of the First World War, with views of the Royal Pavilion being used a military hospital, so goes full circle.

I’m always being asked where all the old photographs I have come from. It’s a long story! In 1968, my brother bought a ‘proper’ 35mm camera, and, loaded with film (36 pictures worth), we went out early one summer evening to try it out. We walked around central Brighton, taking photographs of things we noticed had changed recently, or had just been built. Why we chose to do this, I’ve never worked out. I’m not sure we really knew what we were doing. We took the old Hippodrome variety theatre, recently converted into a bingo hall, the new Brighton Square in the Lanes, plus views of the Palace Pier, and seafront. We took others, over succeeding years, including the huge American Express complex going up, one street down from where we lived. In 1972, the book ‘Victorian and Edwardian Brighton from Old Photographs’ came out, which really was the first collection of old photographs to be published. I found it a total revelation. I contacted the author, James Gray, and visited him many times over a twenty-year period, at first just to buy photographs off him, to go with all those modern day views we had been taking. I bought other photographs at collector’s fairs and other places, copied some out of old magazines, guidebooks, etc. etc. In time, as my own collection built up, I would swap pictures with Jim, having had copies made for him, he’d give me spares he had, and I would take any modern day views he needed, of buildings about to be demolished in Brighton. 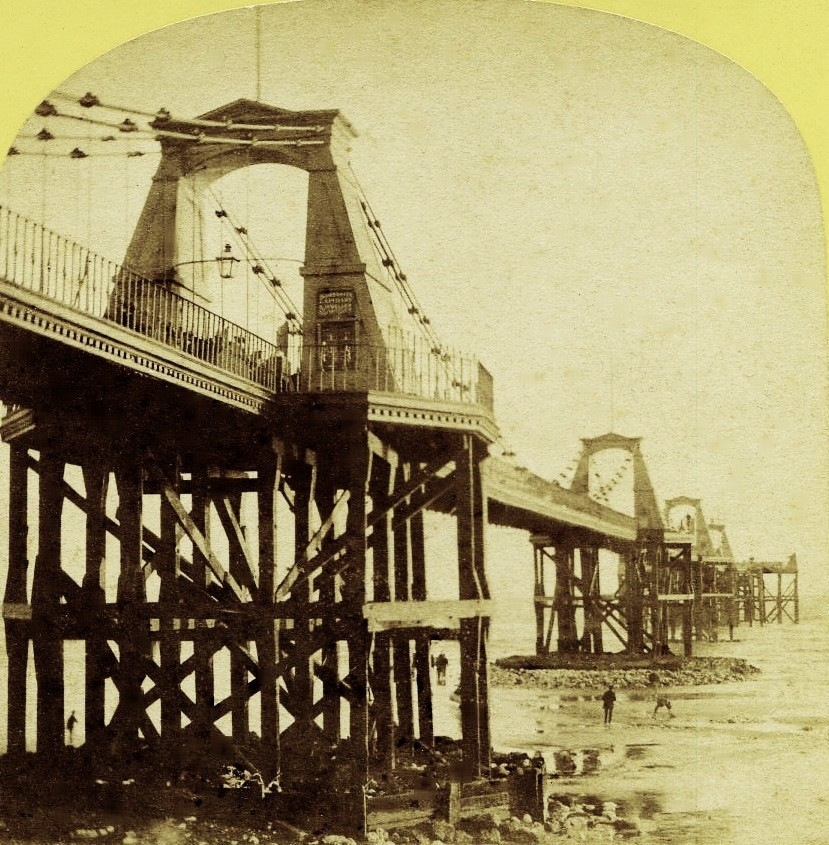 Surprisingly, our collections were, and are, very different. Jim’s was mainly topographical - streets, housing, buildings, etc., with Hove, Portslade, Falmer, Woodingdean, Rottingdean, plus all of ‘Greater Brighton’ included, entirely in photographic form, no old drawings, engravings or prints. Mine would be exclusively Brighton, nowhere else, and included drawings and prints, interiors too, which Jim wasn’t keen on, plus ephemera, tickets, letters, advertising material, and theatre programmes.

Jim put me in touch with other historians and collectors, including Antony Dale, founder of the Regency Society of Brighton and Hove ( I supplied all the pictures for his last book), and Philippe Garner, a photographic expert of Sotheby’s, London, who has a really unique collection of original Brighton photographs - no copies or postcard views - dating from the 1840s. Some of his pictures appear in the book. Other views come from postcard collectors I know, notably Robert Jeeves, who has the best set of Brighton cards there is, and Peter Booth, who has a very fine collection too, with many unusual views.

That’s only part of the story. I don’t know really how many I have now, but it must be getting on for 20000. At present, about half that number has been digitalized and ‘photoshopped,’ if faded or damaged - an ongoing situation at the moment.

As my collection spans all periods of Brighton’s history, right up to the present day (I still take photographs of what’s changing), there could easily be a follow-up book, with more photographs continuing from the First World War, through the 1920s and 1930s (when Brighton reached the peak of its appeal), ending with the start of the Second World War. We’ll see! 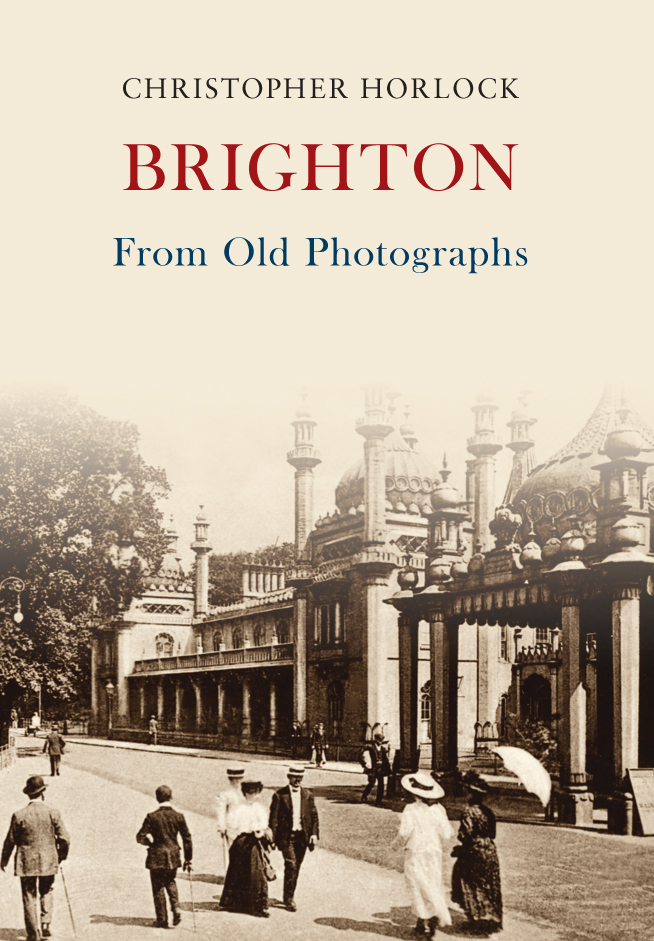