The Georgian Kitchen by Emma Kay 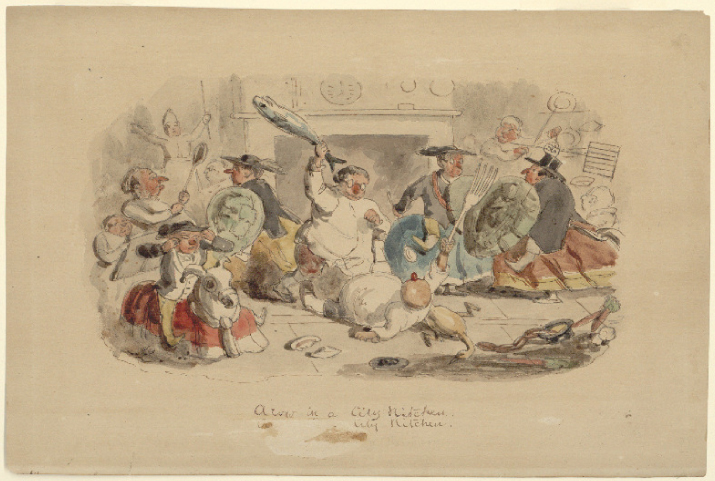 I wrote the Georgian Kitchen to tell the story of my conviction in Britain’s cooking culture forming during this period. This was a time of extraordinary change in Britain, when the country became a vastly powerful world entity; a wealthy, extravagant and culinary rich nation. Conflict, poverty and sea power led many migrants to British shores. As well as importing from all over the world and exploiting other countries of their own resources, Britain’s migrant population was already influencing the way we still eat today. The population doubled during the Georgian period and in particular large numbers of French citizens began to quickly dominate Britain’s kitchens. It became imperative for every wealthy household to employ a high ranking French cook, while the middling and labouring classes dined in the abundant inns, taverns, cook shops and street markets. The workhouses and prisons were overflowing with the poor and destitute who might look forward to a dollop of ‘hasty pudding’, mouldy bread or a potato every day – if they were lucky. Most poorer families shared a single cooking pot which would have sat in the middle of their one room accommodation, to be used for cooking, washing and as a urinal. In addition to the workhouses early philanthropy included the understanding that owners of large estates and tenured country residences would provide the poor of their parishes with a basic meal, usually of soup and benevolent soup kitchens began to flourish in some of the bigger cities by the early nineteenth century.

There was a stark contrast between poor rural and urban living, the former reliant on self-sufficiency and few luxuries such as tea, coffee and sugar that would often require a long trip to a local market. Even the middle classes, like Jane Austen herself kept livestock. All farmer’s wives were skilled in cheese-making, brewing, preserving and curing which was a necessary seasonal routine in order to survive all year round. The Georgian era was also the one that marks the beginning of the end of large rural communities, as new technology and innovation began to broaden the scope for work and travel, with aspiring people migrating to the large towns and cities to live. By the end of the 1700s the urban cook shops, coffee houses and club culture for those men of high rank and business were already beginning to morph into early forms of restaurants and hotels. As greater emphasis was attached to the importance of food and slow developing advancements in kitchen design and contents evolved, kitchen equipment became a valuable commodity and the records of the Old Bailey during this period are full of incidents of thefts of anything from tea caddies, to silver spoons and sugar nippers. These items could be sold on at the dodgy street markets or pawned for food and clothing. The media was also awash with specialist crafted items for the kitchen and new inventions. In 1800 the average kitchen may have contained one or two pans. By 1899 they would have housed a whole set.

As previously mentioned French cuisine, in addition to Italian confection and iced deserts dominated British culture during the Georgian age. However it is also important to reiterate that British cooking and British recipes were always included on the menu - or as the eighteenth century termed it ‘A Bill of Fare’, interspersed with European dishes. Celebrity chefs such as the great Marie-Antoine Carême, Louis Eustache Ude, Charles Francatelli, Alexis Soyer and William Jarrin are just some of the names who lived and worked in London divulging their European culinary secrets and whipping up gastronomic delights that were worthy of any of the big name celebrity chefs of today. They also all wrote prolifically about it, contributing to the new mass eighteenth and nineteenth century consumerism for recipe writing, including Mrs. James Simpson’s first Vegetarian cookery book of 1812. 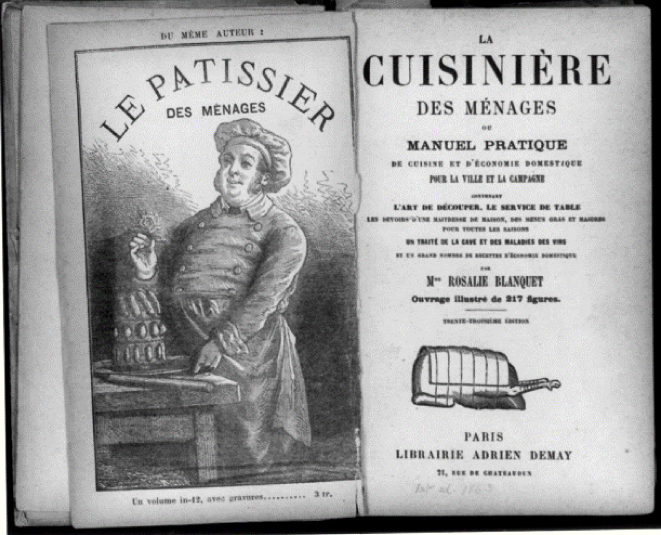 Diarists and housekeepers also left their legacy of recipe writing and accounts of domestic kitchen and dining routines that were so integral to the Georgian lifestyle. The journals of James Woodforde, a simple country parson provide us with an indication of how even the humblest of middle class Georgians ate. We learn how he attends regular country dances, often into the early hours of the morning, feasting on roasted shoulder of mutton and plum pudding, followed by veal cutlets, frill’d potatoes, cold tongue, ham, cold roast beef and eggs in their shells. This was all washed down with punch, wine, beer and cider. Food is a regular theme throughout Woodforde’s diary and is a stark reflection of the importance placed upon culinary satisfaction and excess at this time. His description of one dinner he hosts for three acquaintances is quite hard to swallow (literally). The first course alone consisted of a couple of boiled chickens, a tongue, a boiled leg of mutton with capers and a batter pudding. The second course provided roasted ducks, green peas, artichokes, tarts and blancmange. And it continues - with almonds and raisins, oranges and strawberries, naturally ending with port wine. Such extravagance on a regular basis makes it so understandable that we associate poor health and obesity significantly with this period. Interesting how our own society mirrors some of this today alongside the Georgian throw away, disposable culture.

Celebrity chefs, endless recipe books promoting the latest fad or baking craze, elitist French cuisine, a new gadget for the kitchen marketed every month, Immigration, class divide and cheap imports. We are not so different after all. 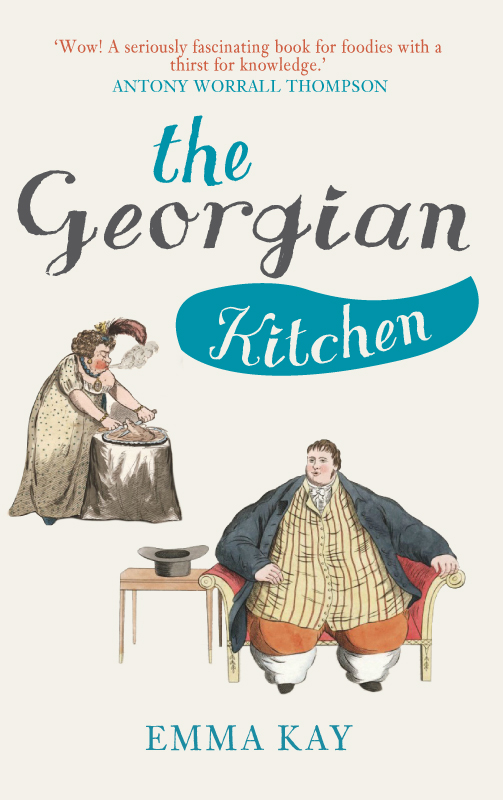 Emma Kay's The Georgian Kitchen is available for purchase now.